He studied the Islam academically in the university and obtained the highest degrees with excellence, the forensic science was taught to him by a number of great Sheikhs and Scholars and as a result he got testimonial and honor from them, in his possession there’s a variety of activities and he’s been teaching the Sunnah and Hadith and giving lectures in mosques, in addition to that he animates religious competition and some TV shows, this is the Saudi Arabian preacher whose full name is Umar Ibn Abdellah Ibn Mohammed Ibn Saleh AlMuqbil, born in Ramadan of 1392 H.

Umar Almuqbil obtained a bachelor degree in 1414AH from the faculty of doctrine in the Islamic university of the Imam Mohamed Ben Saoud, then got a Master degree in the Sunnah in 1421AH From the Faculty of Theology at the University of Imam in Riyadh, then culminated his academic path with a doctorate in the same field from the same university in 1427 AH.

In parallel, Umar Almuqbil continued his religious studies and was taught by some of the most prominent Sheikhs and scholars like Muhammed Saleh Ibn Althaimeen, Abdelaziz Ibn Baz, and Sheikh Yahya Ibn Abdelaziz Al Yahya.

After his graduation and being recommended by the Sheikhs who taught him, Umar Almuqbil held numerous positions and responsibilities, as he worked as a professor in the Sunnah department, and was elected as a member of the Islamic awareness during the Hajj period, in addition to that he was supervising a number of religious competition and theses in the Master and P.H.D degrees, and right now he’s a preacher in Mohammed Ibn Saleh mosque in the Al Medhonab province, and a professor of Hadith in Qassim University since 1414 AH.

His religious sense and great preaching led him to travel inside and outside Saudi Arabia, so he participated in many Religious seminars and conference with the purpose to clarify the real meaning of Islam as Umar Almuqbil has charisma that inspire people.

Umar Almuqbil possesses dozens of books and publications that address the community issues from an Islamic perspective and how to overcome them, in addition to that he produced dozens of audio and video lessons, plus the shows he animates in TV Channels such as "prophetic medals", "lights of the Sunnah”, "Koranic rules" and other programs which raised his reputation. 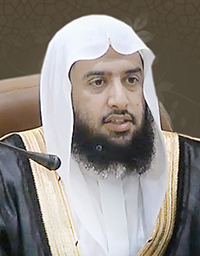 Umar Almuqbil
Umar Almuqbil… an exclusive Sheikh with several activities. He studied the Islam academically in the university and obtained the highest degrees with exc...
z