A TV Program Director and Animator in Saudi Arabian TV, he studied in the U.S and lived there for a while, he was influenced by the occidental culture and was about to opt for it, but his return to his homeland changed his ideology, and he decided to change his old bad habits and review his perception about Islam.
His dream was to give a renaissance to the Islamic Nation by the resurgence of its youth, benefiting from the experiences of the occidental world which wasn’t something wrong. This is of course the Saudi Arabian Ahmed AlShugairi who is known with his famous TV show “Khawatir”, which is broadcasted in MBC Channel.

Ahmed Al Shugairi was born in the 17th of July 1973 in the Saudi Arabian city Jeddah, thanks to the financial capacity of his family, he was able to study in U.S and get a Master degree in business administration field from the University of California, Berkeley.

During his residence in the U.S, Ahmed Al Shugairi had a personality completely different in comparison of what we know about him, according to his confession he stopped praying for a while, and was addicted to cigarettes for 2 years.

After his graduation, and according to his affection to his homeland and charity work, he returned back to Saudi Arabia and established a private firm structured as commercial company but its purpose was purely charity.

In Parallel, he started studying the Islamic Sharia, his colleague Sheikh Adnan Zahrani participated a lot in changing his wrong understanding of Islam as he explained him the tolerance and openness of Islam and showed him that all the good values which the occidental are trying to spread among their societies have been applied by Islam for more than 1000 years. As a result Ahmed loved Islam more, and decided to reawaken the Arabic and Islamic world.

So Ahmed AlShugairi started his first steps in TV in 2002, as he participated in a TV Show called “Let’s Go Boys”, which targeted the Arabic teenagers, throughout he discussed their problems and how to treat them, then the Idea of “Khawater” show hit his mind, which was the beginning of his fame.

Before that, Ahmed Al Shugairi faced some difficulties with MBC Managers to broadcast the “Khawatir of Youth” show during Ramadan in which he wanted to communicate with the youth in a modern and a practical ways and urging them to read, by highlighting that the first word sent by God to Muslims is “Read”, he was also looking for solutions of common problems in the Islamic world.

Ahmed Al Shugairi achieved his goal and was able to put on place his TV show “Khawater” which succeeded remarkably in the years that came after, then he was opened up to a variety of subjects which targeted the building of a typical world that can establish the patriotism inside the Muslims and in a sincerity manner, he was also looking for the appropriate way to stand against the corruption that the Arabic world is suffering from, in order to resurrect the great civilization of Muslims and get back their lost glory.

The Ideas of Ahmed Al Shugairi interested the Arab public, and succeeded remarkably, as his program “Khawater” has achieved the 10th season in 2014, especially after making its episodes in a number of Arabic and Occidental countries where he gave concrete examples of his Ideology. As a result of this great work, he was nominated the most influencing leader in the Arabic world.

Ahmed Al Shugairi possesses a number of TV programs, such as “If he was among us” in which he explained how to take the prophet Mohamed as a real example in our daily life, plus another show called “Trip” which he presented with the Sheikh Hamza Youssef.

In addition to his TV programs, he was the author of many books like “Khawater”,”My trip with Ghandi”, and what is remarkable is that Ahmed earns his life from his own private firm while the rest of his revenue sources (TV Programs, and books…) goes to charity.

From a personal perspective, the first marriage of Ahmed Al Shugairi didn’t succeed while the second one with Rola Dashisha did and with whom he had two boys; Youssef and Ibrahim. 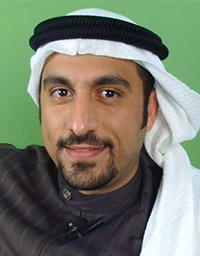 Ahmad AlShugairi
A TV Program Director and Animator in Saudi Arabian TV, he studied in the U.S and lived there for a while, he was influenced by the occidental culture and was abo...
z