He was born in 1976 in Saudi Arabia; he’s a well-known preacher, historian and activist. Al-Husaini also has the Bahraini nationality though some sources claim that his origins date back to Afghanistan. He’s an Arab muslim with Shafi’i-Sunni orientations. He studied history in Bahrain in addition to the Shariah traditionally and academically. Shaykh Al-Hussaini organized various distinctive associative activities and animated successful shows.

Shaykh Hasan Al-Husaini has grown up in a conservative environment among a religious family that supported his pursuit of science and knowledge for after high school, the Shaykh continued his studies in various Arab and Islamic countries. He graduated from the Shariah Faculty that belongs to the Imam Muhammad Ibn Saud Islamic University. Al-Husaini obtained a Master’s Degree in History in Bahrain as well as a Bachelor’s Degree in the Quran, the Hadith and other religious sciences. He is currently writing his doctoral thesis about the Sahabah.

Moreover, the Shaykh as an activist took part in a number of religious and social civic organizations and religious bodies. He is a member of the Shariah Scholars Association in the Gulf, member and one of the founders of the Executive Committee of the Association of the Bahraini Family, member of the association “Al-Aal wa Al-Ashab”. The latter is an association that provides clarifications about the relationship between the companions of the Prophet (PBUH) and Ahl-al-Bayt (the family of the Prophet Muhammad (PBUH)). Furthermore, he is considered one of the prominent founders of the political Bahraini Association of modernity.

In addition to his associative activities, the Shaykh animates different religious programs on various Arab channels such as ‘Sahwat Bahrain” (Bahrain’s awakening), “Ayam Omar” (Omar’s life) and other shows that are animated on his own or with the company of other Shaykhs. 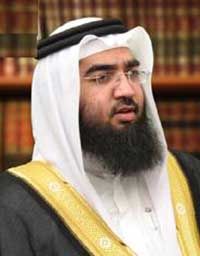 Hasan Al-Husaini
He was born in 1976 in Saudi Arabia; he’s a well-known preacher, historian and activist. Al-Husaini also has the Bahraini nationality though some sources claim th...
z