Aid al-kabir (the greater aid) also called Eid al-Adha is one of the two most important Islamic festivals, Eid al-Adha begins on the 10th day of Dhu'l-Hijja, the last month of the Islamic calendar. Lasting for three days, it occurs at the conclusion of the annual Hajj, or pilgrimage to Mecca. Muslims all over the world celebrate Eid al-Adha, not simply those undertaking the hajj, which for most Muslims is a once-a-lifetime occurrence.

Eid Al-Adha commemorates Prophet Abraham's willingness to obey God when he envisioned that he was to sacrifice his son. Muslims observe this day by slaughtering an animal (usually a sheep) and then offering much of its meat in charity to poor people.
The sacrifice symbolizes obedience to Allah and its distribution to others is an expression of generosity, one of the five pillars of Islam.

Eid Al Adha will be celebrated this year on 9 July 2022 (+-1 day), the Festival of Sacrifice is a religious festival celebrated by Muslims, Eid ul-Adha annually falls on the 10th day of the month of Dul Hijja of the lunar Islamic calendar.

We wish you a happy Eid. 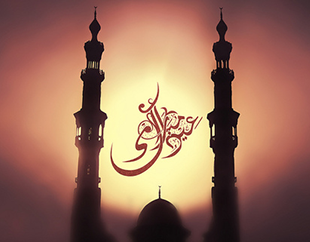 On the tenth of the month of Dhu al-Hijjah every year, Muslims all around the globe hit a date with one of the most important religious rituals in Islam, right at