Saad El Ghamidi is a Saudian reciter born in 1968 in the Oriental, Saudi Arabia.

Saad El Ghamidi studied in Dammam. As a student, Saad was very active. He often participated in summer journeys, Qur'an Memorization circles, associations. He graduated from the University of Chariîa with a religious studies Degree (Oussoul Din). In 1990, he memorized the whole Qur'an and was distinguished by his soulful voice as a recite.

In 1985, he chose a Monchid (religious singer) career. His first tracks were very successful and earned him a wide recognition such as "Malakna Hadihi Donya Qorounan" and "Gharbane".

Saad El Ghamidi cute his way to recognition as an Imam during Tarawih's prayers in the holy mosque. He later released a first record which met a considerable success. Saad El Ghamidi had a degree in Al Isnad on the recitation of Hafs by Assem.

Saad El Ghamidi has toured many Arab countries such as Koweit and others like Austria, USA and GB. 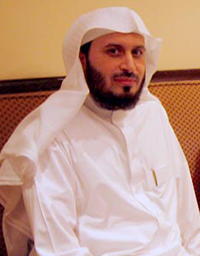