Abdul Rahman Ibn Abdul Aziz as-Sudais an-Najdi is a Saudi world renown qari, he was born in Saudi Arabia and he's originally from the Anza clan. Al Sudais is the leading imam of the Grand mosque in the Islamic city of Mecca.

At the age of 12, Al Sudais memorized the Holy Quran, and studied in the 'Al Muthana Bin Harith' Elementary School and was graduated in 1979 with a grade of excellent in ' Riyadh scientific Institution'.

Al Sudais studied in Riyadh University and received a degree in Sharia in 1983, and a Master from the Sharia College of Imam Muhammad bin Saud Islamic University in 1987. In 1995 he obtained a Ph.D in Islamic Sharia from Umm al-Qura University.

Sheikh AL Sudais is known for the particularity of his voice and for his emotional recitation of the Quran in accordance with Tajweed.

In 2005, he received the prize of the ' Islamic Personality Of the year' in the 9th annual Dubai International Holy Quran Award. 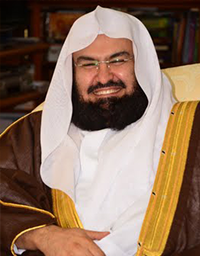