Abdullah Al Khayat was an outstanding reciter of the Holy Qur’an. His recitations were during years opening Saudi official TV channels and radio stations.

Abdullah Al Khayat was widely appreciated thanks to his beautiful voice and bewitching recitations. Leader of the reciters of the time, Abullah was also a distinguished theologian and a man of letters and a member of the Master Theologians Instance. He has memorized the Holy Qur’an at a early age and took his first religious lessons from eminent Cheikhs of the time like Cheikh Abdullah Ibn Hassan Al Echeikh, Abdu Daher Mohamed Abu Samh and Cheikh Mohamed Abdurrazik Hamza.

Abdullah Al Khayat was a graduate of the Saudi Scientific Institute of 1360 Hijri. He was nominated imam and preacher of the Holy Mosque in Jeddah by a royal decree. He was exempted from his functions regarding to the deterioration of his health condition.

Abdullah Al Khayat has published many pieces of work on different religious matters which contributed to the intellectual Islamic movement.

Abdullah Al Khayat died in Shaabane of the Hijri year 1415. 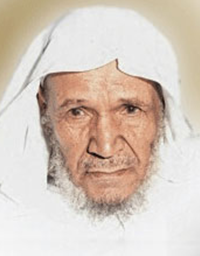