The Quran reciter Malek Shaiba Alhamd is one of the young Egyptian Quran readers who memorized the holy Quran and mastered its reading methods, which qualified him to take the Imamate of the Muslims in numerous mosques.

Sheikh Malek Shaiba Alhamd was born on Sunday, 10th of July, 1983 in Egypt. His educational orientation from the beginning was towards the deepening of knowledge in the world of “Tajweed” and its methods. For that, and just after finishing his secondary studies, he joined “Al Azhar” Institute of readings, as he was taught by many sheikhs, most notably Sheikh Ayman Shawki, who obtained a certification and the Sanad from Sheikh Al Zayat May Allah have mercy on him, and Sheikh Abdul Basit Hashim.

The reciter Malek Shaiba Alhamd obtained a certification according to Hafs Aan Assem’s recitation method from Al Shatibiya and the Sanad to the messenger of Allah Muhammad (PBUH) and that is after he had read the full Quran on the Sheikh Ayman Shawki. He has also received a recommendation from Sheikh Muhammad Jibril after he had read the holy Quran under his supervision.

After his graduation, Sheikh Malek Shaiba Alhamd took part of the Imamate of several mosques, as he prayed the “Taraweeh” prayers in “Al Mahrousa” mosque in Mohandessin, in “Al Tawheed” mosque in Shubra, in “Al Qadi Yahya” mosque in Helmeih and in the “Islamic compound” mosque in Sheikh Zayed. 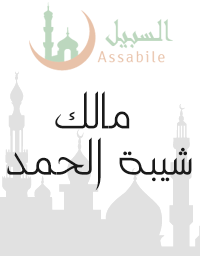