Sheikh Antar Said Muslim is one of the most respected and well known Quran readers in the Arabic world. His celebrity is due to his talent as well as his excellence in various ways of reading the Quran (Riwayat).

Antar Muslim was born in 1936 in the Egyptian village « Al-‘Amma ». Once he reached his first year, he lost the gift of sight due to an illness. Yet, this didn’t stop him from studying and discovering the genius inside him because of his fast ability to remember and his outstanding memory. As a result, said Muslim joined the primary school “Azhar” and his Sheikh predicted a very bright future for him.

His relationship with the Quran began at an early age, where he completely memorized the whole Quran while being 8 years old. And at the age of 12 years old, he began reading the holy Quran in religious ceremonies and in funerals.

As time went by, he became famous in various parts of Egypt and the Arab world. However; he was faced with numerous criticisms; especially by the “Al-Azhar” mosque, concerning his “ignorance” of the science of the “Quranic readings” which led to prevent him from reading on the radio waves.

Besides his passion for reading the Quran; Antar Said Muslim was known for his skills and ability in the art of « Maqāmāt » or « Assemblies » and for his musical talent, including playing various instruments like lute, violin and flute. This qualified him to excel and outshine in « Maqamat » or « assemblies » transfers.

His passion for this art did not stop at the borders of learning but he also shared it with the public through the festivities of religious chantings and gatherings.

Sheikh Muslim died in 2002 at the age of 66, leaving behind him a legacy of Quranic recordings and a son « Samir Muslim » who followed his footsteps by memorizing the Quran and his Tajweed. 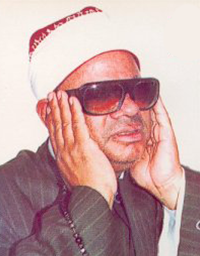 Antar Muslim
Antar Saïd Muslim... defeating disability Sheikh Antar Said Muslim is one of the most respected and well known Quran readers in the Arabic world. His celebrity...

Antar Muslim
Antar Saïd Muslim... defeating disability Sheikh Antar Said Muslim is one of the most respected and well known Quran readers in the Arabic world. His celebrity...
z