The Egyptian Sheikh and Doctor “Ahmed Ahmed Nuinaa” was born in the year of 1952, in “Motobas” city in the province of “Kafr Al Sheikh”. He was deeply influenced by the Quran reader Sheikh Mustapha Ismail.

Sheikh Ahmed Nuinaa received his elementary and secondary education in the “Motobas” schools, and he received his high school education in “Rashid” in “Al Beheira” governorate. After that, he joined the faculty of medicine in the University of Alexandria, and he worked at the University hospital in Alexandria post his graduation. Later on, he was appointed as the vice director at the University children’s hospital, and also a vice director at the therapeutic institution in the same city. Moreover, Sheikh Ahmed Nuinaa has a master’s and doctorate degree in pediatrics.

Sheikh Ahmed Nuinaa was able to completely memorize the holy Quran at only the age of eight years old, and he learned the art of “Tajweed” under the supervision of Sheikh Ahmad Al Shawa. He regularly listened to the best Quran readers via the radio, and he always tried to mimic and copy them, including: Sheikh Muhammad Refaat, Sheikh Abdul Basit Abdul Samad, and Sheikh Abou Al Ainayn Shuaishea, but he was strongly influenced and affected by Sheikh Mustapha Ismail who was his idol and whom he appreciated very much, he also imitated splendidly his Quran reading style to the extent of matching. Sheikh Ahmed’s most memorable testimony about Sheikh Mustapha Ismail was: “After that my love and appreciation for him grew stronger, I’ve gotten to know him closely when I went to the faculty of medicine in Alexandria. I found out that he is the most complete Sheikh, because he had several ways of teaching and preaching.”

Sheikh Ahmed Nuinaa had the privilege to study the “Ten readings” under the supervision of Sheikh Mohammad Farid Al Noamani and his wife Sheikha Um Saad, as he used to learn with them every day after “Al Fajr” prayer for two hours before heading to the University.

Sheikh Ahmed Nuinaa became famous because of his special voice, and he was strongly approached by the associations and the mosques. He used to read the holy Quran in the “Youth Muslims” association, which was under the supervision of Dr. Ahmed Darwish, the health minister at the time.

The year of 1967 witnessed a marking event in Sheikh Ahmed Nuinaa’s life. The president Anwar Sadat listened to his Quran reading in an air force ceremony, just when Ahmed Nuinaa finished his studies and joined the Egyptian Navy.

His “Tajweed” was very appreciated by the president Anwar Sadat, who listened to his readings two more times and showed his attachment to him by recruiting him in his special secretariat as a personal doctor. Anwar Sadat also ordered that Sheikh Ahmed Nuinaa will read the Quran wherever he goes. As a result, he was named “the presidency Quran reader”, and he kept this name even during the reign of the former president “Hosni Mubarak”, as he used to read in his special celebrations.

Sheikh Ahmed Nuinaa was fortunate to read in front of the most famous and popular kings and presidents, as he travelled to several countries around the world. Besides that, Sheikh Ahmed won the first price in an international Quran reading competition in 1985 in India. He was also crowned as the best Quran reader in another competition in Malaysia in 1995 and in a third one in the Sultanate of Brunei. 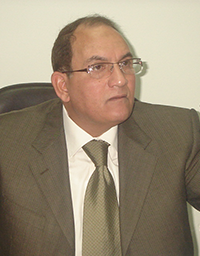 Ahmed Nuinaa
The Egyptian Sheikh and Doctor “Ahmed Ahmed Nuinaa” was born in the year of 1952, in “Motobas” city in the province of “Kafr Al Sheikh”. He was deeply influenced ...

Ahmed Nuinaa
The Egyptian Sheikh and Doctor “Ahmed Ahmed Nuinaa” was born in the year of 1952, in “Motobas” city in the province of “Kafr Al Sheikh”. He was deeply influenced ...
z