Abdulbasit Abdusamad is a renowned Qur'an reciter born in 1927 in a village called Almara'za in Egypt.

Abdul basit Abdu samad learnt the Holy Quran at an early age from Cheikh Mohamed El Amir and later from Mohamed Selim Hamada. He entered the National Radio Station in 1951. The first Surah he recited was "Fater".

In 1952, Abdulbasit Abdulsamad was appointed official reciter to Al Imam Achafiî's mosque and then to Al Imam Al Hussain's mosque in 1985.

Abdulbasit has left a fortune of high qualified recordings of both the chanted Holy Scripture and the recited one. He was an ambassador of the Holy Qur'an across many countries and the first president of Egyptian reciters Bar in 1984.

Abdulbasit Abdusamad went to many Arab countries to recite the Qur'an in Ramadan such as the Saudi Arabia and Syria. 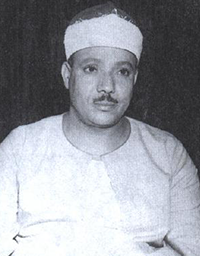