Sheikh Abdelfatah Al Chaachai is one of Egypt’s most prominent scholars and a master of the different Quranic recitation methods. The almighty Allah has gifted him with a beautiful and sweet voice that he swore to use only to recite the Quran.

Abdelfatah Al Chaachai was born in the village of “Al Chaachaa” in Menoufia in 1890. He grew up in a very conservative family, which widely affected the course of his life, as his personality was influenced by his father Sheikh Mahmoud Ibrahim Al Chaachai, who taught him the holy Quran and helped him memorize it at the age of ten years old.

Sheikh Abdelfatah Al Chaachai was distinguished since his childhood by his heartfelt voice. Yet, Talent alone is never enough, as it needs to be polished; for that, he moved to Tanta city where “Al Ahmadi” mosque exists and it was there where he learned the rules of “Tajweed” and the fundamentals of “Al Mad” following the normal way.

In 1914, Sheikh Abdelfatah Al Chaachai traveled to Cairo, after that the Sheikhs and scholars of Tanta advised him to join “Al Azhar” mosque since he showed more talent and determination in comparison to his peers in “Al Ahmadi” mosque. It was there where he deepened his knowledge in the sciences of Quranic readings as he was taught by the Sheikhs Bayoumi and Ali Subaie.

His determination and drive to succeed, and his mastery of the Quranic readings made Sheikh Abdelfatah Al Chaachai rise to the ranks of the geniuses of the “Tilawat” in Egypt, such as Refaat and Ali Mahmoud, as he used to consider them a school that taught him the Ousoul of Tajweed.

However, Sheikh Abdelfatah didn’t become popular in the Islamic community up until his recitation in the closing night of the birth of Imam Hussein, where he obtained a high place and a large fan base, admirers and students such as Sheikh Mahmoud Ali Al Banna, Sheikh Abou Al Aynayn Al Shu'aisha and others…

During his career, Sheikh Abdelfatah Al Chaachai worked as a Quran reader in “Al Sayeda Nafisa” mosque and in “Al Sayeda Zaynab” mosque. He was the first Imam to read the holy Quran in Mecca and in the Prophet’s mosque and at the Arafat stand using loudspeakers, and he was also the second Quran reader in the Egyptian radio channel after its launch. Besides that Sheikh Al Chaachai was able to couple between the “Tajweed” and “Al Touchih” or “musical composition”, as he created a group of religious musical compositions, but in 1930, he decided to fully focus on the Quranic readings.

Sheikh Abdelfatah Al Chaachai passed away in 1962, at the age of Seventy two years old, after that he devoted his entire life for the recitation of the Quran and for teaching it. 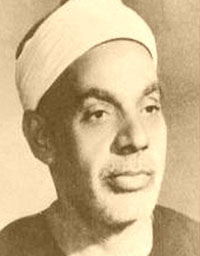