Blindness was never a handicap for Shaykh Mustapha Gharbi for he was strong-willed to achieve his objectives. Born in 1964 in Settat (Morocco), he learnt the Quran through listening. However, his reciting style of the holy book verses brought thousands of people to assist to his prayers in Al-Shuhadaa’s mosque in Casablanca.

The Sheykh learnt the holy book at the age of twelve, which was quite surprising for his family members, given his handicap. However, thanks to his determination, he made his father proud, for he always wanted to have a son who mastered the holy book.

It is quite difficult to bring information about his career or his childhood in details. When he became aware his reciting talent, he wanted to be part of a Quran recital competition, aired in the Moroccan national television. However, he abandoned the idea at the last minute.

The decision was a great change in his career, as it allowed him to commit to the teachings of the Quran, the art of reciting, which allowed him to excel in the field and to imitate great reciters such as Abdulbaset Abdusamad.

Shaykh Mustapha Gharbi’s ultimate aim was to become an Imam and to share his knowledge of Islam with the rest of the world. In 1980, he officially became an Imam and was assigned to work at the Mosque Tarik Bournazil. He remained there for two years then moved to the mosque of Al-Shuhadaa in Casablanca.

For years, his reciting talents reunited thousands of believers to the mosque during the eighties and nineties. Afterwards, he led several prayers in Hassan II’s mosque for seven years.

Shaykh Mustapha Gharbi represented his country numerous times in different competitions in Saudi Arabia, Pakistan…The Shaykh had a unique approach in guidance and counseling, he always favored wisdom, modesty, preaching of Allah and his mercy as the right way to fulfill a peaceful life. In 2006, he was accused of drug trafficking before being exonerated of the charges. 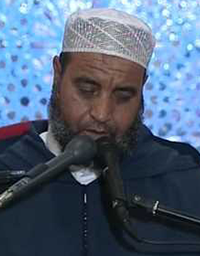 Mustapha Gharbi
Blindness was never a handicap for Shaykh Mustapha Gharbi for he was strong-willed to achieve his objectives. Born in 1964 in Settat (Morocco), he learnt the Qura...

Mustapha Gharbi
Blindness was never a handicap for Shaykh Mustapha Gharbi for he was strong-willed to achieve his objectives. Born in 1964 in Settat (Morocco), he learnt the Qura...
z