As our prophet Muhammad peace be upon him said “Who masters the Quran belongs with the respected, honorable and pious people”. What about who thought about creative and original ways to teach the holy Quran to the young and emerging generation?

His name is Abdelhamed Hssain, born in 1932, in the capital Rabat; and he is considered one of the most known Sheikhs in Morocco, most notably for his ‘Tajweed’ abilities.

Sheikh Abdelhamed Hssain showed from an early age his passion for learning the Quran; and because of that, his father put him in the Quranic School to memorize and learn the holy book.

Also, Sheikh Hssain assumed the responsibility of teaching the Quran to the Moroccans and he believed in his ability to do so.

In order to achieve it, he joined the national radio, where he was assigned the supervision over the Arabic programs in the Moroccan national radio.

Proceeding from his responsibility as a supervisor on the programs of the national radio, Sheikh Abdelhamed Hssain gathered with Sheikh Mahmoud Khalil Al Husary in order to prepare a radio show with the purpose of teaching the Quran and its sciences. In this context, the famous show “how do we read the Quran” has been established. This program had a large benefit on the Moroccans by teaching them the rules of “Tajweed” according to Warsh A'n Nafie’s method that is widely applicable in Morocco.

Sheikh Hssain efforts in spreading the culture of “Tajweed” between the Moroccans did not stop at the borders of the radio waves; but he also established the first association of Quran readers “Moujawidin” in which he gathered the most prominent scholars and sheikhs of the Holy Quran “Tajweed” in this association to be the starting point for the culture of “Tajweed” in Morocco. After that, he founded “Dar Al Quran”.

In recognition of his efforts in the field of Quran “Tajweed”, he was appointed by the late Moroccan king Hassan II the first Quran reader “Moujawid” in the Ramadan Quran series in 1402 Hijr. It remained like that until he passed away on 21 December, 1992. 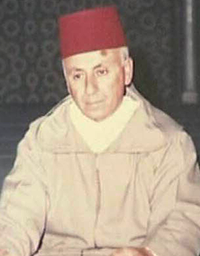 Abdelhamed Hssain
As our prophet Muhammad peace be upon him said “Who masters the Quran belongs with the respected, honorable and pious people”. What about who thought about creati...
z