The late Moroccan Quran reader Faysal Wizar was a young man with many talents and good traits. He mastered the Tilawat of the holy Quran, the Arabic calligraphy and its arts, and he was brilliant with the art of engraving on wood, his sweet voice was very refreshing and his words outlets were perfect and crystal clear. He studied the science of Tajweed and he reinforced it with the Arabic language rules, he worked as an imam and as a teacher for a while, and many scholars expected a bright future for him in the field of the Quranic Tilawat and Tajweed. Yet, the almighty Allah wished that Sheikh Faysal leaves us in the midst of his youth and talent.

Sheikh Faysal was born in the city of Marrakesh in Morocco on the sixth of the month of Shawwal in 1402 Hijr, corresponding to the 27th July, 1982, in a very conservative family that gave him a solid religious base, as it helped him open his eyes and perceptions at an early age. He used to listen to the holy Quran every night in one of the neighborhoods of Marrakech, which was full of mosques and Quranic gatherings. It was there where his beautiful journey with the Quran started, as he was able to memorize the holy Quran and to master its rules.

The first step in his journey was to register in the course of Sheikh Sharif Mubarak in Darb Al Hammam, where he learned the basics of the Quranic readings. He moved after that to the course of Sheikh Sidi Al Haj Boujamaa to complete the memorization of the Quran. He moved after that to Dar Al Quran in order to learn the Tajweed of the Quran on the hands of a group of prominent Sheikhs and scholars. After his registration in the public school, Sheikh Faysal Wizar obtained his primary school degree from Sidi Abdul-Aziz’s school in 1994, and his secondary degree from Mohammad the fifth school in 1997, and then he obtained his high school degree in 2000, in Mohammad the fifth high school in Bab ghmat.

After that, he continued the march of hard work and dedication in the higher education, as he studied in the Faculty of Arabic language for four years, and he obtained his license degree in the Arabic language and its rules with mastery and superiority as he used to surprise his colleagues and teachers with his talents. Some of the signs of his excellence and success are his persistence towards obtaining the University award of excellence throughout all his four years. After his graduation, he joined the teaching branch, in Arabic specialty, in Lakhsas, a city close to Agadir in Morocco.

One of the characteristics of this reader and is that he was not only a reader of the holy Quran but also a skillful calligrapher and a distinctive sculptural artist (within the limits of what our religion permits). He was also a traditional artist who engraved pieces of wood and embellished them with the gifts and abilities Allah gave him. He was also a traveler who visited multiple cities in Morocco, contemplating the kingdom and creation of God. Perhaps the secret of his success and multiple talents is his love for the beauty and for arts and his direction towards the craftsmanship.

Perhaps the best and most beautiful job filled by the reader Faysal Wizar is his Imamate during the Taraweeh prayers in several mosques in his city Marrakech, such as the little mosque, Moulay Al Yazid’s mosque, Sidi Bou Omar’s mosque and other. Unfortunately, Sheikh Faysal and his wife passed away due to a gas leak in their house on the 14th November, 2007, and his body was buried in the cemetery of Sidi Ali Belkacem near the famous mosque Al Koutoubia. 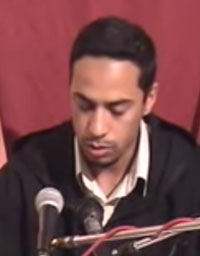