One of the greatest figures and the most brilliant preachers in the Islamic world, he devoted all of his life to serve Islam, and left behind him a huge amount of knowledge mainly Quran explanation, which he produced. He spread the real concept of Islam. His unique style in explaining the Quran was one of the reasons behind his fame in the whole Islamic and Arabic world, as a result he held a number of important responsibilities and positions, but this couldn’t deviate him from the God’s book and Mosque’s tribune, some people called him the Lead of preachers, his real name is Muhammad Metwally Al Shaarawy, born in 1911 in a Dkados village located in an Egyptian province called Dakahlia, and died in 1998.

The 87 years that Sheikh Al Shaarawi lived left a legacy of knowledge, he was distinctive since he was a little kid, as he memorized the whole Quran before reaching the age of 11, then he joined the religious institute “Zakazik” in 1922 where he studied the elementary and secondary education, his talents learning the poems and the quotes impressed his teachers.

After being graduated from high school, Sheikh Al Shaarawy joined faculty of Arabic language in 1937, he admired the poetry and impressed all of his colleagues and professors. Beside his studies he was interested in some activities mainly in the literature, and he was able to get a bachelor degree in 1941 and a P.H.D in 1942 in the teaching field.

After his graduation, he held a number of important positions either in Egypt or outside, as he worked as a professor and agent in many Azhari Institutes. In1950, he travelled to Saudi Arabia and worked as a professor at the Faculty of law at King Abdul-Aziz University in Makkah, then he returned to his homeland and took the position of director in the Ministry of Awqaf in1961. And a year later, he worked as an inspector of the Arab Science in Azhar.

Sheikh Shaarawy worked as the president of Azhar mission in Algeria in 1964, professor and president of department of high studies in Abdul-Aziz University in Makkah between 1970 and 1972. Plus his nomination as the Egyptian minister of Awqaf in 1976, and his election as a member in the Islamic researches institute, and he could have other positions, but the preaching was the thing that interested him the most.

Sheikh Al Shaarawy spent most of his time on delivering lectures in mosques and writing books, and he possesses hundreds of audio and video recordings, most notably his thoughts in the interpretation of Quran, beside numerous books he was the author of, such as "Islam and contemporary thought," "Israa and Miiraj" and "the Hajj accepted".

Thanks to the huge effort of his interpretation of Quran, and his service to Islam, Sheikh Al Shaarawy received a number of recognitions and awards like the order of merit, first class which he got in 1976, plus the first class medal he obtained in 1983 and 1987, in addition to that he was granted the honorary doctorate in literature from the University of Mansoura and Menoufia.

He passed away in 1998, after 87 years which was devoted to serve Islam, and he was buried in his natal village, but his achievements are still alive and beneficial to millions of Muslims. 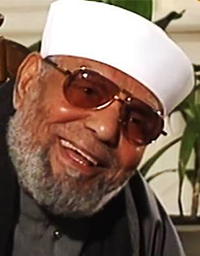