Mohamed Hassan… a man with an elegant look and ethical behavior.

With his acute voice and sharp words which attract every ear, he becomes the center of intention, as once he speaks, every human around him is reverenced and touched with his strong words, his name has shined very early and has earned a fame since he was a little boy, he’s been travelling around the world with the sake for redirecting people to the right path, and thanks to his guidance, a huge number of people repented and others converted to Islam from other religions, this glorious description can only be appointed to one of the biggest preachers in the Islamic world Mohamed Hassan, and his full name is Mohamed Ibn Ibrahim Ibn Ibrahim Hassan.

The world heard his first cry in a small village called ”Dmoh Dakahlia” in Egypt in 1962, within a modest family whose the Islamic religion was inherited from their grandfathers, and he was educated to behave properly, especially by his maternal grandfather who inspired him to love science, and to acquire the knowledge since he was a little kid.

Before the age of 4, Mohamed Hassan joined the Quran School in the village where he lived, and he started learning Quran, and he was able to memorize it at the age of 8 with the assistance of Sheikhs Misbah Mohamed Awad, God bless him. He also learnt by heart some texts of Shafii’s Jurisprudence and some parts in the doctrine, and once he turned 12 years old, he memorized so many books from the Prophet biography, poetry and arabic language, such as “Riad of Righteous”, “Ajarumia”, ”Masterpiece Tuck” and so on.

And thanks to this background, Mohamed Hassan started teaching and preaching at the age of 13, in a mosque in a nearby village, in which he taught the books he had studied with a rigor, an eloquent skill and influential touch.

And during his youth, Mohamed Hassan studied the legal science with the assistance of some of Alazhar’s Sheikhs, and in parallel, he studied in the University of Cairo and obtained a bachelor degree in information science, after that he joined the institute of the Islamic studies and got a master degree in the Islamic studies.

Thus, Mohamed Hassan travelled a lot, he has met a number of brilliant sheikhs and was taught by them like “Ibn Jireen”, “Abdelkader Shabia Alhamd”, and the famous Islamic researcher “Ibn Saleh Al Othaimeen”, then he concluded his academic path with a P.H.D with the assistance of Abdellah Ibn Menbaa who is one of the biggest sheikhs and scientists in Saudi Arabia.

After the graduation of Mohamed Hassan, he stayed in Saudi Arabia as a resident for more than 4 years, and he worked there as an Imam and a preacher in Arrijihi Mosque in Riyadh City. He also taught the Hadith Sharif’s approaches and the ways of its Interpretation in the faculty of law and theology in the Islamic university of Imam Ahmed ibn Saud.

As a result of this rich history, Mohamed Hassan participated in many lectures and conferences, either in his country or outside it. He also participated in a congress of Quran and Al Sunnah in Indiana Police in the U.S in 1993, in the Islamic congress in the Canadian city Toronto in 1993, and he earned more fame in one of the American congresses which took place in New York city, where 75 people have declared their conversion to Islam from other religions right after a touching speech that he delivered there.

Currently Mohamed Hassan devotes all of his time to influence people to the right path, through his speeches and education, as he’s now an Imam and preacher in many mosques, professor of religion at the institute of preacher’s preparation in the Egyptian city Al Mansoura, and the chairman of the Sunnis complex Management.

Mohammed Hassan possesses hundreds of audio and video tapes, and dozens of publications and books in many fields, and among them, there’s (Rules of The Muslim Community), (The truth of Monotheism), (Imams of Guidance and Darkness Lamps). He also presents and animates a number of TV Programs, such as “We’re Going to Work”, “the Events of The End”, “The Nation’s Diseases”, and the list is longer. 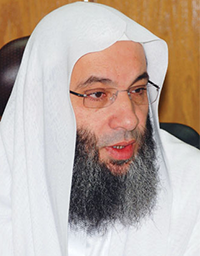 Mohamed Hassan
Mohamed Hassan… a man with an elegant look and ethical behavior. With his acute voice and sharp words which attract every ear, he becomes the center of inten...

Mohamed Hassan
Mohamed Hassan… a man with an elegant look and ethical behavior. With his acute voice and sharp words which attract every ear, he becomes the center of inten...
z