The world heard her first cry on 1948, in Cairo and her growing up was in a conservative environment, inspired from the prophetic guidance and scoop of the wide muslim culture, as a result, she crossed her way steadily through the spiritual guidance and the religious preaching path. This is the story of Abla El Kahlaoui; the Egyptian and islamic propagandist whose fame pervaded the islamic and arabic worlds.

Her father Mohamed El Kahlaoui had an affection for the spiritual music (Anasheed) and islamic anthems, although his prominence in this area as a leader, he cared so much about his daughter’s guidance, and he directed her to study the Islamic law in the prestigious university El Azhar, in which she excelled and acquired a master degree in 1974, she then carried on in the same field and culminated her studies by obtaining a P.H.D in 1978.

Her outstanding success either from an academic perspective or intellectual background and her eagerness to disseminate her science and knowledge were the reasons that pushed Abla El Kahlaoui to teach in a multiple of arabic universities, such as the Saudi Arabian education faculty for girls in Riyadh and the faculty of Islamic studies in the Egyptian university al-Azhar.

In 1979, Dr Abla El Kahlaoui had been nominated as the head of the department of Islamic law at the university Umm Al Qura in Mecca, this significant achievement pushed her to improve her educational curriculum in the religious field and adapt herself with the modern era, which were the reasons behind her fame and allowed her to have an important position in the religious preaching, which was exclusive to men only.

Between 1987 and 1989, Dr Abla worked in Makkah on providing doctrinal courses for Muslim women who came from different parts of the world, and after this rich experience, she moved to Cairo to join her father’s Mosque where she helped to influence women on her entourage to a religious awareness. She also worked on supervising and guiding actresses who decided to retire from acting due to religious purposes.

Her tenderness, sense of affection, and being a skilled orator are the reasons, which made her jump from the insides of mosques and universities to the big screen. Her fans call her “Mother Abla” thanks to her popular opinions, especially after the hit serie “In love with Mustapha” which was broadcasted during Ramadan of 1428 (Islamic Year) on the channel “Arrissala”.

Dr Abla has founded a charity association to undertake the Orphans, patients and the elderly under the name of “Albaqiat Essalihat” as she was known with her ethical principles. And currently she combines between her charity work and her doctrinal teaching in Al Azhar University as well her advocacy work which constitue her sublime mission in life and her unique method to approach people and get closer to God. 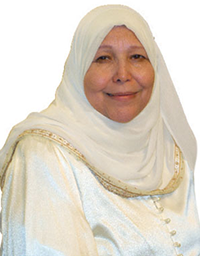 Abla Al Kahlawy
Abla El Kahlawi… a rich doctrinal journey and an outstanding spiritual giving. The world heard her first cry on 1948, in Cairo and her growing up was in a cons...

Abla Al Kahlawy
Abla El Kahlawi… a rich doctrinal journey and an outstanding spiritual giving. The world heard her first cry on 1948, in Cairo and her growing up was in a cons...