Omar Abdelkafy… the Sheikh of moderation.

He’s one of the stars of the civilized jurisprudence, and an example of the moderation curriculum in Islam. His affection to the nature was one of the reasons which pushed him to study the agriculture science, he obtained the best degrees and diplomas, and was rewarded with the greatest recognitions and honors.

Initially, he worked in the cultivation, but the minimum tillage wasn’t enough for him, so he chased what is beyond life, which was the paradise and that’s what helped him to live peacefully. He transferred his knowledge through the public speaking and teaching, he guided people with his touching words and sweet advices, and his success was outstanding in mosques and congresses, the number of his followers in TV satellite channels was one of the highest scores, besides his possession of hundreds of speeches, lectures and books, this is of course the Islamic preacher Omar Abdelkafy whose the full name is Omar Abdelkafy Shahata.

Omar Abdelkafy was born on the labor day of 1952 in the Egyptian province which is called Almania among a conservative family, his father was one of the notable men in the region of “Saiid”, and his mother had in her memory a large part of the Quran, he was educated by his parent properly with religious principles, which gave him a unique affection to god and his prophet.

Since Omar Abdelkafy was a child, he had a sharp intellectual mindset, and instinctive intelligence, as at the age of 10 he was able to learn by heart the holy Quran, Albokhary book and Muslim book, and he was excellent along the different stages of his studies.

Thanks to his rural environment, and the innate passion of science and knowledge, Omar Abdelkafy loved the agriculture science, admired the Arabic language and its artistic literature, and was fascinated by the religious science and its forms, as a result he was able to obtain a bachelor degree in the Arabic language, Master degree in the comparative jurisprudence, and a P.H.D in the Agricultural science.

With the influence of some of the best Islamic preachers, such as Abi Hanifa, Ibn Taymia, Hassan Albasri, Al Ghazali and so one, Omar Abdelkafy decided to chase the knowledge in different places, and god helped him to meet great preachers, who taught him the Quran Interpretation, the doctrine science and the prophet’s biography, and he was able to learn the Quran science thanks to their assistance, and the Hadiths of the prophet and their roots.

After finishing the academic studies and acquiring a set of forensic knowledge, Omar Abdelkafy was able to hold important positions and responsibilities, initiated in 1972 as an Imam and a speaker in mosques, in which he delivered regularly 2 lectures on a weekly basis and during a whole 20 years. After that he was nominated as a member in the World Body of Scientific Miracles, and The Wise Men which is part of the International Union of Islamic Researchers, he was also a professor in the scientific research academy, and a director of the Quranic studies in Dubai International Holy Quran Award foundation.

Throughout his advocacy career, Omar Abdelkafy was known with his unique moderated speeches, which combine between the linguistic eloquence and the intellectual content. His lectures were appointed to a variety of Muslim audiences, and as a result, he was admired by the other Islamic preachers, and loved by Muslims all over the world. His TV and radio programs are followed and admired by a huge number of fans.

Because he believes in the importance of diversity in terms of preaching, Omar Abdelkafy delivered more than 1200 Jumaa speeches, and recorded more than 3000 audio-video lectures, besides his presentation and animating of dozens of TV Shows, such as “From The Treasures of Sunnah”, ”the Net Spring”, “The Real Promise”, “The Lucifer Diaries” and “Wonders Heart”…

Omar Abdelkafy possesses dozens of books and publications like “The Hereafter”, “Interpretation of Albokhary Book”, “The Prophet Biography”, “The Real Promise”, the list is longer. These great achievements became a reference for students, researchers in the Islamic and Arabic worlds.

From a personal perspective, Omar Abdelkafy got married with the granddaughter of the great Islamic preacher Mohib Eddine Alkhateeb, with whom they gave birth to three boys (Ahmed, Bilal and Amar) and two girls (Huda and Nada). 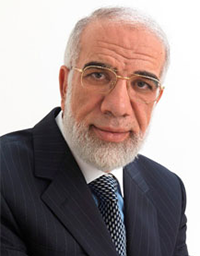 Omar AbdelKafy
Omar Abdelkafy… the Sheikh of moderation. He’s one of the stars of the civilized jurisprudence, and an example of the moderation curriculum in Islam. His affec...

Omar AbdelKafy
Omar Abdelkafy… the Sheikh of moderation. He’s one of the stars of the civilized jurisprudence, and an example of the moderation curriculum in Islam. His affec...
z