Abdelhamid Kishk… the knight of tribune and the Islamic movement advocate.

He overcame his blindness disability which he got at an early age, by memorizing the whole Quran before reaching the age of 10, and although the tortures and the imprisonment he received, he carried on his quest, and thanks to his power of determination and eloquence, his companions called him as “the knight of tribune and the Islamic movement advocate”, this is the story of the Islamic and Egyptian preacher Abdelhamid Kishk who was born in 1933, and passed away in 1996.

He grew up in Al Buhaira province in Egypt, and learnt the Quran by heart before the age of 10, his studies were in the religious institute in Alexandria, in which he was able to be graduated from elementary school and high school with a high grades, then he joined the theology faculty, where his professors were impressed by his intelligence and acumen, and they decided to delegate him the responsibility of teaching his colleagues on their behalves, and as expected, he was graduated with honor.

He was assigned the responsibility of a professor in the theology faculty, but he gave just one lecture, and decided after to resign from the university in order to devote his full time to deliver lectures in mosques.

Thus, Abdelhamid Kishk switched his role from a professor in the university to an Imam in Tahhan mosque, and in the meantime a preacher in another mosque in Cairo, and in 1962 he became an Imam and Preacher in a mosque called “Ain Hayat”, where he worked for 2 decades.

The audacity of Abdelhamid Kishk, his transparence, and his criticism to social and political corruption in Egypt, were the reasons which put him in jail in 1965, and was sentenced to two years and a half, during which he was horribly tortured, and in 1976 and after the Camp David accords, he criticized the human values in Egypt which made him in conflicts with the Egyptian security forces who accused him with treachery.

These conflicts were a motif to put him once again in the prison in 1981, where he was tortured despite his disability, and after a whole year, he was released, but with a restriction to exercise the preaching.

This ban was used effectively from Abdelhamid Kishk, as he recorded more than 2000 audio speeches and over 1000 books, plus a folder of 10 parts under the name of “Interpretation Rehab” in which he explained the meaning of Quran in an easy and simple way.

Despite his blindness at an early age, he was never disappointed, as he overcame his disability, and ensured the job of a preacher for 40 years without committing a single linguistic error, and he was considered one of the best Islamic and Arabic orators during the 20th century, the best thing that happened in his life was the way he died, as it was exactly like he wished, in other words, dying while he was knelt in prayer. 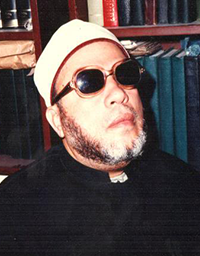 Abdelhamid Kishk
Abdelhamid Kishk… the knight of tribune and the Islamic movement advocate. He overcame his blindness disability which he got at an early age, by memorizing the...

Abdelhamid Kishk
Abdelhamid Kishk… the knight of tribune and the Islamic movement advocate. He overcame his blindness disability which he got at an early age, by memorizing the...