Many Sheikhs disagree with his modern doctrine and Fatwa legal opinions, his opponents believe that all of his interpretations and opinions are due to the pressure of the modern era, however his supporters see the opposite, in other words, he’s basing his opinions on a jurisprudent foundation, this is Yousuf Al Qaradawi, the famous Islamic preacher and one of the most prominent contemporary scholars in jurisprudence and Sunnah.

Yusuf Al Qaradawi was born in 1924 in the Egyptian province “Al Gharbia”, he grew up there as well, and he was able to learn the Quran and Tajweed techniques before reaching the age of 10, then he went to the University of Al Azhar where he studied the elementary school and high school as well. He was considered one the most brilliant students, and he materialized this image by getting the highest grades along all of his studies.

In 1953, He was graduated from the University of Theology in Cairo, he also obtained a bachelor degree in teaching from the university of Arabic language in Cairo in 1954, plus his diploma in the institute of the arabic studies in language and literature in 1958, after that he got a master and P.H.D degree in Quran and Sunnah from the faculty of theology in 1973.

The Academic degrees he did get and his instinctive intelligence, allowed him to hold important positions which qualified him to teach, and deliver lectures in mosques with a political touch.

Thus, he supervised in the Institute of the Egyptian Ministry of Religion as an imam, after that he held the position of general manager for the Islamic culture in Al Azhar, which led Qatar country to invite him to improve their religious institute, and as expected he was able to deliver this mission successfully. He carried on getting more responsibilities, like the one he got in 1977 where he set up the faculty of Sharia and Islamic studies in Qatar University in which he became its dean.

His Genius intellect, and sharp intelligence were the reasons which qualified him to be a scholar beacon during the 20th century, but his audacious fatwas and controversial opinions put him in conflicts with his opponents and got imprisoned as a result.

These kind of conflicts went beyond the borders of his homeland and spread in some European countries like U.K, France which considered him as an unwanted man, and banned him to enter their territories because of his support to Palestinian resistance against the Israeli colonization.

These tough circumstances didn’t stop him, as he was able to write many books, record a number of audio and video conferences, and participated in intellectual debates and TV programs.

Sheikh Yusuf Al Qaradawi received numerous awards thanks to his prominent intellect, and he’s currently the president of the International Union of Muslim Scholars, and as a result of his brilliant history, he’s considered one of the most influencing personalities in the Islamic World. 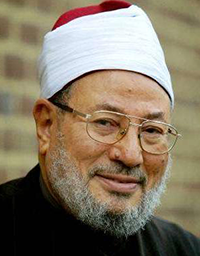