The Golden voice holder, Osama Alsafi, has earned a very important place amongst the Arabic chanters and Quran readers, as he obtained the “Media and chanting award” from the international conference of Muslim youths in 2002, alongside the award of “best voice” in the Doha artistic festival in 1999.

Osama Hashem Alsafi was born in the UAE, where he grew up and continued his studies in the scientific field, far away from the Islamic domain, as he was specialized in engineering and urban design and he obtained a masters degree from the University of Sidney in Australia.

Osama Alsafi moved from the architectural design to the artistic design, switching his focus from building houses to building the future of the next generation, throughout the Islamic rules and teachings, in order to build the self esteem, do good deeds with others and towards Allah, as he said during an interview with Arrisalah magazine.

Osama Alsafi believed in the idea that the Almighty Allah gave him a wonderful voice in order to use it in reading and reciting the holy Quran and sharing the Islamic principles. For that, he joined the world of Islamic Chants and Tajweed, and his debut was with the Islamic education group in the school and in several educational forums, then with the mobile events of Samar. Also, he studied the art of Tajweed and Maqamat under the supervision of prominent readings scholars.

Osama Alsafi held numerous positions and responsibilities, both in the scientific and artistic fields, as he was appointed head of the department of Rehabilitation and Construction Studies in Dubai Municipality, as well as a member of the competitions unit of the Dubai International Holy Quran Award, a representative of the International Organization for the Memorization of the Holy Quran in the United Arab Emirates, and the founder and president of the Sheikh Mohammed Noor Bin Saif Quran Memorization Center and Islamic Sciences, while also supervising Establishment of the Emirates Association of Chants.

The first artistic release of Osama Alsafi was in 1998, followed by a series of individual or group versions such as “Farhatouna”, meaning our happiness, “Fi Ouyouni”, meaning “in my eyes”, and “the road of Al Saaleheen”, and other chants in which he sought to convey the message that “with the pressures of life and the frequent distortions on the minds and thoughts, it is difficult to orientate people and convince them, so it is necessary to put the messages in a soft and calm way”. 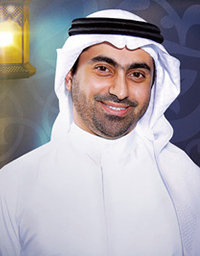 Osama Alsafi
The Golden voice holder, Osama Alsafi, has earned a very important place amongst the Arabic chanters and Quran readers, as he obtained the “Media and chanting awa...

Osama Alsafi
The Golden voice holder, Osama Alsafi, has earned a very important place amongst the Arabic chanters and Quran readers, as he obtained the “Media and chanting awa...
z