About the five prayers

The prayer is considered the base of the Islamic religion, and it is the second pillar in the five Islamic pillars, and it was imposed by the Almighty Allah in the night of Israa and Mi’raaj. In the beginning, it was fifty prayers in the day, then Allah made it only five prayers a day, and each Salat has the benefits of ten prayers, so we perform 5 prayers and we get the benefits of fifty prayers. The five prayers are Al Sobh, Al Dohr, Al Asr, Al Maghreb and Al Isha as the scholars unanimously approved.

The scholars of the Muslim community in the past and now always agreed concerning the obligation of the prayers performance, and that it is the second Islamic pillar, and to prove that, they Quote the holy Quran, from Surat An Nisa: “But when you become secure, re-establish [regular] prayer. Indeed, prayer has been decreed upon the believers a decree of specified times”, and this verse shows to which degree the five prayers are obligatory upon Muslims. And from the Sunnah, they Quote the prophet Muhammad PBUH: « then tell them that Allah has enjoined upon them five Salat during the day and night; and if they obey you »

On whom is it obligatory?

Most scholars believe that prayer is obligatory for every Muslim, adult, and sane person, male or female. A Muslim is against a kaafir « non-believer », and a non-believer does not have to pray, and it is not accepted from him, even if he does it. An adult person is the person in which we see the signs of puberty, and it is normally at the age of 15 years old, such us the semen signs, pubic hair and the beginning of menstruation in women. Also, a crazy person is not obliged to pray due to his inability of distinguishing between right and wrong.

The Five Prayers have special times set forth by the Shari’a, according to the verse in Surat Al-Nisa: « Indeed, prayer has been decreed upon the believers a decree of specified times ». Thus, the Dohr prayer starts from the afternoon, and Al Asr prayer is between the Dohr prayers and the sunset, and the time of the Maghreb prayer starts from sunset to the fall of the red sunrise, and then Al Isha prayer timing is between fall of the red sunrise and the third of the first night, and finally the Sobh prayer timing is from second dawn until the sunrise.

Number of its Rak’ahs

The muslim should be pure and clean, to remove « Al Najas » from the clothes, the body, and the prayer place. Also, to have the intention of the prayer, the Qiblah, to cover the body parts, and takbir Al Ihram. Reading Al Fatiha, Al Roukou’a, Al Soujoud, and most importantly, the concentration during the prayers, etc.

There are many prayers Sunnah that the Prophet PBUH used to perform, and the Companions and those who followed them came after them. Such as the Istiftah Dou’a, reading something from the Quran after Al Fatiha, raising the hands in the Takbir, placing the left hand under the right hand under the navel while standing in the prayer, to do a prayer on the prophet after the last Tashahoud and to turn right and left during the Taslim, etc.

The five prayers: definition, legitimacy, timing, duties and sunnah
About the five prayers The prayer is considered the base of the Islamic religion, and it is the second pillar ...

Arabic glossaries define ablution as grace, cleanliness, and enlightenment, Islamic Scholars define it as the procedure for washing specific parts of the body in a specific way with th... 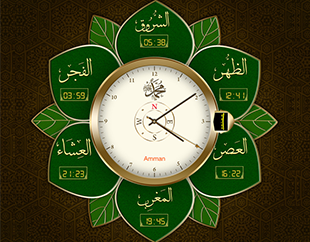 The five prayers in Islam are called: Fajr, Zuhr, Asr, Maghrib and Isha. The schedule for these five prayers varies from place to another and...