He studied Quran in the College of the Holly Quran and Islamic Studies at the Islamic University of Madinah ( Kingdom Of Saudi Arabia), in specialization ' the ten readings and translations of the Holy Quran'. He has read the Quran to Sheikh Ahmed Abdulaziz Al-Zaiat, Sheikh Ibrahim Ali Shahata Al-Samanodei, and the Sheikh Abdurarea Radwan. He impressed number of great scholars of Quran.

Actually Sheikh Mishary Al Afasy, is he Imam of Masjid Al-Kabir (Grand Mosque) in Kuwait City, and every Ramadan he leads the Taraweh prayers in this Mosque.

Al Afasy has 2 Space Channels specialized in the recitation of the Hol Quran, the first is Alafasy TV and Alafasy Q. 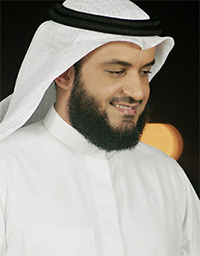