His name is Jazza Bin Falih Alsuwaileh, one of the most popular Kuwaiti Quran readers. He was born in Kuwait in 1969, and he is considered as a reference in the art of Quranic recitation in his country.

Sheikh Jazza Alswaileh began to learn and to memorize the holy Quran at the age of thirteen years old, following the guidance and the encouragements of his parents. And despite the absence of Quranic gatherings of memorization at that time, Jazza was able to memorize the Quran and to recite what he could learn from the Sheikhs who accompanied him in the mosques. In fact, he memorized the whole Quran, and he mastered its origins, and he chose the path of teaching it in numerous mosques and Quranic schools, a mission that he has been doing for nearly twenty years, and as a result, several prominent Sheikhs, men and women, graduated under his supervision.

He earned the certification of the holy Quran from the top Quran readers in the Islamic world, including Sheikh Ahmed Abdulaziz Al Zayat, Sheikh Abdullatif from “Al Azhar”, and the Sheikha Oum Saad from Alexandria. He is considered one of the best Quran readers in the “Tilawat” and “Tajweed”, and he is different from other reciters by his special vision, that gives more importance to the meaning than the beauty of his readings.

Sheikh Jazza Alswaileh held multiple positions, such as being a teacher of the holy Quran and the “Tajweed” in the faculty of Shari’a in the University of Kuwait for twelve years, and a certified Quran reader in the holy Quran radio channel in Kuwait and in Saudi Arabia, and also a volunteer Imam at the Ministry of Awqaf in “Habib Al Banay” mosque in Kuwait. He is, besides that, the supervisor of the Quran schools in the faculty of Shari’a and Islamic studies, and he held several courses of “Tajweed” in Kuwait and in Arabic and European Countries, as he also participated as a member of the jury in several Quranic contests and he supervised some Quranic projects.

Moreover, Sheikh Jazza has several Quranic TV shows in Kuwait, as he also appeared in other channels such as “Al Arabia” channel for his TV show “And Recite the Quran”. He also has numerous recordings of the Quran with his voice, including the holy Quran according to Hafs Aan Assem’s recitation method, as well as a number of lectures like “How I learned the Tajweed” during the third Quranic congress. 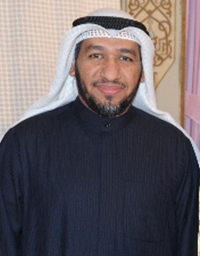 Jazza Alswaileh
His name is Jazza Bin Falih Alsuwaileh, one of the most popular Kuwaiti Quran readers. He was born in Kuwait in 1969, and he is considered as a reference in the a...

Jazza Alswaileh
His name is Jazza Bin Falih Alsuwaileh, one of the most popular Kuwaiti Quran readers. He was born in Kuwait in 1969, and he is considered as a reference in the a...