His full name is Sheikh Abou Al Hareth Hamad Sinan, a Kuwaiti Quran reader and an Islamic preacher. He is currently working as an Imam and a preacher in “Al Bachar” mosque, and he grew into one of the most prominent and outstanding Imams all over his country after being a professional singer.

Unlike most of the Islamic sheikhs, Hamad Sinan beginnings were far from the holy Quran and the Islamic Da’wa. On the contrary, he was best known in the artistic field, as he was one of the popular singers in his country and in the Arabian Gulf for nearly eight years of his life since 1973. He became famous for his songs with the Edenic rhythm, and he used to imitate the late Yemeni professor Mohammad Juma’a Khan.

Sheikh Hamad Sinan did not discover the true guidance up until the last ten days of Ramadan in the year of 1981; His brother was the one who invited him to perform Qiyaam Al Layl prayers with him, in order to take advantage of the holy month Ramadan’s rewards. Sheikh Hamad agreed and he accompanied his brother to “Al Matir” mosque, they prayed behind the Iraqi Imam Sheikh Al Dulaimi. The Imam recited a verse from Surat “Al Rahman”, which influenced strongly Sheikh Hamad Sinan; as it was the real reason behind changing the course of his entire life and finding the path of truth. The verse was: "وَلِمَنْ خَافَ مَقَامَ رَبِّهِ جَنَّتَانِ", which is translated to: “And for him who fears the Station of his Lord there are two Gardens“.

Following this incident, Sheikh Hamad Sinan decided to leave completely the singing world, in order to focus on worshiping the Almighty Allah and on memorizing the holy Quran. He was able to master his “Tajweed”, until he received a certification according to Hafs Aan Assem’s from “Al Shatibiya” method. He even took the Imamate in the year of 1987.

After finding his guidance, Sheikh Hamad Sinan said: “When a person is raised in a religious environment, they start having some questions if their work is not conform to their environment. That’s what happened to me, I was in a constant fight with myself and I was always wondering whether I’ll make it, and if I make it who guarantees that I don’t get uncrowned? These feelings used to haunt me when there was an Islamic Awakening”.

Sheikh Hamad was known for his pure worshiping for Allah, for his constant kindness, and for his abundant knowledge, especially in the Quran, Al Fikh and Al Ousoul; also for his efforts towards leaning and teaching the Quran. Besides that, he was a member in the Imams and Muezzins selection committee.

Sheikh Hamad Sinan has several audio and video publications, most notably: a recording of the holy Quran, and his participation in numerous television programs including a program called: “Fi Diyafatikum” on the Kuwaiti “Al Watan” channel. 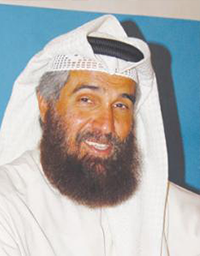 Hamad Sinan
His full name is Sheikh Abou Al Hareth Hamad Sinan, a Kuwaiti Quran reader and an Islamic preacher. He is currently working as an Imam and a preacher in “Al Bacha...

Hamad Sinan
His full name is Sheikh Abou Al Hareth Hamad Sinan, a Kuwaiti Quran reader and an Islamic preacher. He is currently working as an Imam and a preacher in “Al Bacha...
z