Virtuoso of many instruments, singer-songwriter, Yusuf Islam was first known by his former stage name Cat Stevens. He was also prominent for his conversion to Islam at the peak of his artistic career in 1976.

Following his conversion, Yusuf Islam gave up his career as pop star and devoted himself to philanthropic and educational causes in the Muslim communities. He founded numerous Islamic schools like Islamic Primary School in 1981 and vowed his fortune to promote Islamic education and charitable actions.

Yusuf Islam’s return to the public spotlight was in 1985, at the Live Aid concert dedicated to Ethiopian children. For several years, accompanied solely by drums and percussive instruments, Yusuf only sang lyrics about Islamic themes. Later, his experience with Raihan group on “God Is the Light” introduced him to nasheed’s style. In 2000, Yusuf wrote and produced a children's album “A Is for Allah”. Later on, albums succeeded and Yusuf Islam gave performances in many countries. The latest was at the Peace One Day concert at the Royal Albert Hall on September 21, 2007.

Yusuf Islam is married to Fauzia Mubarak Ali since September 1979 and has five children.

From the same country United-Kingdom 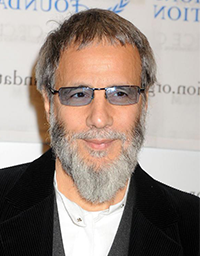