His full name is Sheikh Mohammad Rachad Abd Al Salam Abd Al Rahman Al Shareef, born in the Palestinian city “Al Khalil” in 1925. He is seen as one of the most famous Quran readers in the Islamic world; and he is also known by the beauty of his voice and by his multiple talents. He later on moved to Jordan in 2002.

Sheikh Mohammad Rachad Al Shareef began learning the Quran recitation “Tarteel” at an early age. He was formed by Sheikh Hussein Abu Sunaina, a graduate of Al Azhar University; and he was certified by him according to Hafs Aen Assem’s and Warash Aen Nafiae’s recitation methods. He was able to master the holy Quran Reading at the age of eighteen years old, and he was deeply influenced by the reading “Tajweed” of Imam “Al Moujawidin” in the twentieth century, the late Sheikh Mohammad Refaat. Mufti “Al Khalil”, Sheikh Abdullah Tahboub has listened to his Quran reading in 1941, and he sent him to the Palestinian radio in “Al Quds” city, where the late Palestinian poet Ibrahim Toukan heard his Quran reading and approved on his reading style.

Concerning the technical and artistic style of recitation, strong similarities were observed in the voice and the performance between Mohammad Rachad Al Shareef and his Sheikh Mohammad Refaat, who listened to him in 1943, and testified about their great similarities through a letter he sent him, by saying “I am now listening to the second Mohammad Refaat of Palestine”.

Sheikh Mohammad Rachad was appointed as a reader in “Al Aqsa” mosque in the year 1966, and he also used to read the holy Quran in “Al Haram Al Ibrahimi” in “Al Khalil” city.

At the time of the holding of the Islamic conference in Jeddah in 1980; former Jordanian minister of Awqaf Kamel Al Sharif was assigned the task of calling Sheikh Mohammad Rachad Al Shareef to Amman to record a complete version of the holy Quran with his voice in order to be distributed throughout the Muslim world. Also, he recently issued a recorded Quran version, recited by his voice called “Al Masjid Al Aqsa holy Quran”, which was recorded in the Jordanian radio station. The Quran was named “Al Hashemi recited Quran of Al Qods”.

The almighty Allah blessed Sheikh Mohammad Rachad Al Shareef with his multiple talents. He was a Quran reader, a writer, a poet and a calligrapher; and he was special in each one of them. He masters Al Ruq’ah script, Al Thuluth script and the Persian script; he has also authored the Arabic language book for the first grade by the commission of the ministry of education in Jordan. Besides that, he excels in the art of poetry, to the point where his famous poem about “the teacher” surpassed Ahmad Shawki’s poem. He also has a “Diwan” that has not yet been printed, due to his focus on the multiple Quran sciences.

Sheikh Mohammad Rachad Al Shareef had the privilege to teach the Arabic language, the holy Quran and its sciences for more than thirty years in “Al Khalil” University and several Quranic schools. He also taught many Quran recitation masters “Tilawat”, such as his son “Maarouf” the Imam of “King Abdullah’s” mosque and the Muezzin of the unified Athan currently in Amman.

Sheikh Mohammad Rachad was appointed as the general supervisor by the ministry of Awqaf to supervise the Quranic schools in “Al Khalil”.

After several years of continuous productivity in various fields, Sheikh Mohammad Rachad Al Shareef passed away in Oman, at the age of 91 years old in the 26 September, 2016.

From the same country Palestine 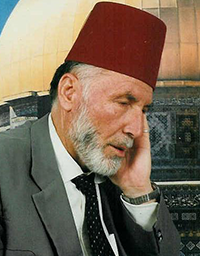