Born in Kuwait in 1985, the preacher Mishary Al-Kharraz started his religious duty among his friends in the University, discussing different issues relating to Islam that inspired him to tackle the case of reverence during the Islamic prayer.

The lesson was held in the “Masjed Al-Kabir” (big mosque) in Kuwait and played a big role in the celebrity of the Imam, but also attracted the attention of a number of believers: 25 thousand people attended his last session in the same mosque.

To reach such records during religious seminars, the scholar strongly believes and talks about reverence during Islamic prayers but most importantly the means to reach such reverence that will finally lead the Muslim believer to enjoy and appreciate the prayers. This lead him to attract the attention of a number of well-known Arab channels to present his show “Kayfa tataladado bissalat” (How to enjoy the Islamic prayers?) discussing the same topic. The show was broadcasted during the holy month of Ramadan.

After succeeding in his mission and transmitting his message concerning the prayers, Shaykh Mishary Al-Kharraz focused on the relationship between the creator and the created naming his show “Kayfa tataamalo maa Allah” (How do you deal with Allah?) which is, according to the shaykh, one of the most important shows for it focuses on the mystical relationship between Allah and the believer and how the latter can get closer to his creator and discover more every day.

In addition to these subjects the sheikh got interested in other topics related to Islam in order to promote the prophetic legacy throughout different shows and publications.

With his young age, Shaykh Mishary Al-Kharraz is considered a model for young Muslims; he currently works as an Imam and preacher at the Ministry of Awqaf & Islamic Affairs. 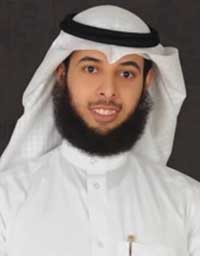