He is an Islamic scholar famous for his da’wa efforts, but also known for his religious programs characterized with a modern touch, to address a younger audience to guide them to the right path; valorizing advice to simplify his message.

Shaykh Faysal alkaff started his religious activity in college. Continuing his activity in different mosques where he had an important success thanks to his constant attendance to all the lectures and debates that were held in Egypt by the most important and well known shaykhs such as Shaykh Shaaraoui that had a great influence on him.

He started to perform his mission and to call Muslims and non-Muslims to Allah since 2004.

As an intermediary between the Creator and the created, shaykh Faisal Al-Kaff understood that the classic way of explaining and teaching Islamic courses needed a modern touch, without changing the essence, opting for an indirect discourse that differentiated him from the remaining shaykhs of his age and generation.

The scholar presented a number of religious programs in a number of Arab channels especially those that have been broadcasted during the holy month of Ramadan. He also directed a number of shows on the radio.

In his shows called “al-halawa” (sweetness) broadcasted on the Channel Iqraa, the sheikh tries to link between the moral and sensorial sweetness. Whereas in his show “yawm wa layla” (day and night) aired on the same channel, the shaykh discusses the Sunnahs of Prophet Muhammad (pbuh) in a modern way.

In the show “adawr al’ulwi” (the upper role) the shaykh tries to reason with his interlocutors and provide advice. Whereas in the remaining shows the scholar discusses various issues of the day and tries to solve them. Furthermore, he is known for his charitable work; for through one of his shows he succeeded to raise more than 3 million riyals to help the needy. 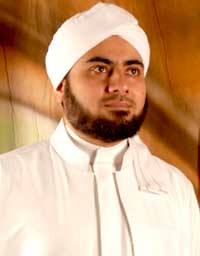 Faisal Al-Kaff
Faisal Al-Kaff, the young Shaykh, the creative preacher. He is an Islamic scholar famous for his da’wa efforts, but also known for his religious programs chara...

Faisal Al-Kaff
Faisal Al-Kaff, the young Shaykh, the creative preacher. He is an Islamic scholar famous for his da’wa efforts, but also known for his religious programs chara...
z