The Quran reader Anas Al Emadi was born in Bahrain in 1403 Hijr, corresponding to 1983. His full name is Anas Bin Issa Al Emadi, and he grew up in the middle of a very religious environment, which helped him develop his love towards the holy Quran since an early age. As a result, he started his journey of the Quranic memorization in 1988, at the age of 5 years old, when his parents put him in the main branch of the center of Abdullah Bin Saud of the Quranic memorizations in the city of Hadd, Bahrain. Anas Al Emadi was schooled by numerous Sheikhs and scholars, such as Sheikh Abdul Halim Mahmoud Al Qari’a, Sheikh Ibrahim Abdullah Al Mannai, before moving in 1999 to the branch of the mosque “Jabar Al Muslim” to learn under the supervision of Sheikh Adel Zaman.

After that he had developed his knowledge, Sheikh Al Emadi continued his secondary education at the religious Institute in Bahrain, where he obtained a bachelor degree with an excellent degree, which enabled him to pursue his University studies in the United Arab Emirates, where he studied the Shari’a in the faculty of Islamic and Arabic studies, and where he received intensive lessons concerning the "Ten readings". Thus, he was able to crown his University path with an excellent degree, as he obtained a certification in the Islamic Shari’a, and he was also certified by Sheikh Muhammad Ahmed Shakroun from Algeria according to Hafs Aan Assem’s recitation method.

His desire towards knowledge and his scientific ambition did not stop at that point, as after he finished his University studies in the UAE, he returned to Bahrain in order to refine his talents in the field of “Tilawat” and “Tajweed” by the help of the finest Sheikhs and scholars. In fact, he read the holy Quran on the Sheikha of the Alexandrian Quran readers, Oum Al Saad Ali Najm, May Allah have mercy on her and she certified him according to Hafas Aen Assem‘s recitation method from Al Shatibiya and Al Taiba, and she also certified him according to Choaba Aen Assem’s recitation method. Up until today, he is still much invested in the Quranic and Islamic gatherings in the Quranic School, as he was able to teach several prominent Sheikhs and Imams, including Sheikh Ali Al Hodaifi, Sheikh Muhammad Ayoub, and Sheikh Ibrahim Al Akhdar and so on.

In addition to seeking knowledge, the Quran reader Anas Al Emadi has accumulated many experiences and skills, as he worked for a long time as an Imam in the mosque of Ali Bin Jabr Al Thani in Al Hadd, Bahrain. He also participated in many Quranic competitions between 2002 and 2008 in and out of his homeland, where he achieved honorable results, most notably winning first place in the Great Bahrain Holy Quran Competition in 2003, fifth place in the Dubai International Holy Quran Contest in the same year, and the fourth place in the International Iranian Competition in memorizing the Holy Quran in 2008. 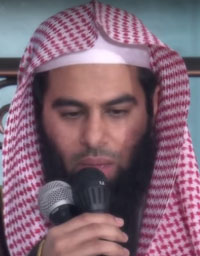