His beautiful voice and his shared feelings are one of his best features that distinguish him amongst the others. His wonderful Tilawat of the holy Quran was and still is receiving a big appreciation and popularity from the listeners. Sheikh Abdulhadi practiced as a teacher and as an Imam and he was able to achieve success and glamour, and he also became popular because of his appearances in the Islamic channels and in the internet. His full name is Sheikh Abdulhadi Bin Ahmad Kanakeri, born in the village « Halabon », close to Damascus, Syria.

This astonishing and successful Sheikh saw the light in his life while being in the midst of a very conservative family that adheres to Islamic principles and that is interested in the Islamic Shari’a, especially his father Sheikh Ahmad Kanakeri who mastered the « Ten readings », who was keen on passing his knowledge to his son after Salat Al Fajr. His father’s guidance and assistance had a profound impact on the making of and sharpening his talents and also on strengthening his willpower to achieve what he has achieved today. Among the other names that supported and directed the path of this reader during his childhood, Sheikh Ahmad Kaftaro, the Mufti of the Syrian Arabic republic, who shared with him several informations and notable knowledge, especially concerning the holy Quran and its rules.

As he grew stronger and more knowledgeable, his father sent him to a public school, in order to finish his studies, which he did with excellence, and he was able to obtain the primary and secondary degrees successfully to join after that a university in Pakistan, in order to obtain his doctorate degree in the science of readings with excellence. Just after his graduation, Sheikh Abdulhadi Kanakeri began to make his own path in the field of Quranic readings and “Tarteel”.

In recognition of his scientific credentials, high qualifications and Islamic knowledge, the reader Sheikh Abdulhadi Kanakeri held a number of positions and responsibilities, including: working as a professor at the Faculty of the prince Sultan of health sciences In Dhahran, Saudi Arabia, and working as an Imam in the mosque of “Abi Bakr Sidiq” until 1430 Hijr, as well as taking the Imamate of many other mosques inside and outside his country, Syria.

As a result of his important journey and of his long experience, Sheikh Abdulhadi Kanakeri has an audio library that includes a large number of his outstanding readings recorded in the mosques or institutions that he worked for. Some are available online, while others are broadcasted in some specialized Quranic TV channels. Also, Sheikh Abdulhadi is known for his ability to take the Imamate during the Taraweeh prayers for a long time, as he can endure such a big effort during the holy month Ramadan. 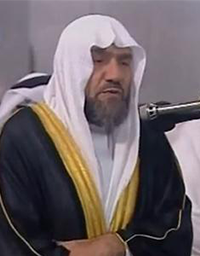