Nabil Al Awadi is a kuwaiti orator, daiya and journalist. He was born in the seventh of February 1970 in Kuwait. His passion for the education and teaching skills led him to study at the fundamental education university, in the mathematics department. He had his bachelor’s degree in education. Then he traveled to UK to pursue his post-graduate studies, where he had a master’s degree in approaches and methods teaching. He is currently preparing his doctorate thesis in methods of teaching in UK.

His interests and his intellectual curiosity led him to deeply study the islamic jurisprudence. He studied the theology, the Prophet's biography and learned the holy Quran and its sciences. He was influenced by the sheikh Mohammad Ben Saleh Al Otheimin, may Allah be merciful to him.

Sheikh Nabil Al Awadi worked in multiple positions, and is a number of various committees, governmental and non-governmental organizations that he helped with his outstanding experience and knowledge. He was a university professor, a member of “mabarrt tarik al Iman (the faith’s road charitable institution)". He is also a teaching committee’s member in the fundamental education university, an Imam in the Mubarak Al-Kabeer hospital’s mosque and a Khatib around the Gulf states. He currently works as an imam and khatib in the Kuwaiti ministry of Awqaf and Islamic affairs.

Sheikh Nabil Al Awadi works in a number of press and media platforms, notably his function in Al-Watan, the Kuwaiti newspaper. He also oversees the new converts to Islam center in Britain, and directs the “tarik al iman (faith’s road)” website which contains his articles, his speeches and conferences.

He traveled around the word to spread the Allah’s daawa. He made many conferences, and animated various television programs on Arab satellite channels, like “zawaya (angles)” program, “Kissas Al Anbiaa (the prophets stories)” series, “Saat saraha” (the hour of truth)” and “Bi kol saraha (frankly)”. During the month of Ramadan in 2014, he presented his famous «Ya Allah (Oh God)", which obtained the audience likes. 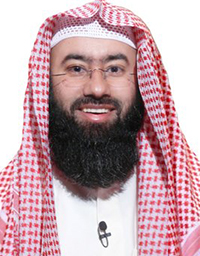 Nabil Al Awadi
Nabil Al Awadi is a kuwaiti orator, daiya and journalist. He was born in the seventh of February 1970 in Kuwait. His passion for the education and teaching skil...

Nabil Al Awadi
Nabil Al Awadi is a kuwaiti orator, daiya and journalist. He was born in the seventh of February 1970 in Kuwait. His passion for the education and teaching skil...
z