Mohammed Ben Abdul Rahman Ben Mohammed Ben Moulhi Ben Mohammed Al Arifi is a descendant of the Prophet’s (All Prayers and Blessings of Allah be upon him) companion Khalid Ibn Al Walid. He was born in Saudi Arabia, in 1970. He was about studying medicine at the beginning of his career, but he changed his decision at the last moment and chose the daawa (Islamic preaching).

Mohammed Al Arefe studied at the Imam Muhammad Ben Saud Islamic University in Riyadh. He had a bachelor’s degree in theology studies in 1991, and then had a master’s degree in Aqidah (creed), theology and contemporary doctrines in 1996. He also had a doctorate degree in the same field and the same university in 2001, with a thesis entitled “Views of the Shaykh al-Islam Ibn Taymiyyah in Sufism, collection and study".

After that, Sheikh Al Arifi continued his pursuit of knowledge in various religious sciences. He had a bachelor’s degree in Holy Quran, from the Yemen reciters’s Sheikh Yahya Lhalala, from the Egypt reciters’s Sheikh Ahmed Issa Almasrawi, and other eminent foqaha (islamic jurists), scientists and Quran reciters.

Sheikh Al Arifi is a member of different local and international Islamic organizations and committees, like his membership in the Human Development Higher Committee, which is affiliated to the islamic world league. He is also the teaching committee’s member in the king Saoud university since 1993, and a lector in Saudi and foreign universities and institutes. He is khatib in the Albawardi mosque in Riyadh since 2006.

The repertory of Sheikh Mohammed Al Arefe includes more than twenty edited books, sold at nominal prices, and many lessons, lectures and speeches which are broadcasted on Arab satellite channels and on Internet, among them, for example: "khotab al joumoua (Friday speaches)", and "al fiqh almoyassar (simplified islamic jurisprudence)". 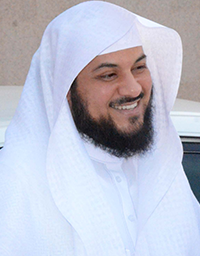