Yousef Bin Abdullah Alshoaey is an Imam of one of the largest mosques in the Saudi capital Riyadh, and he is amongst its most prominent Quran readers, who grew up loving the holy Quran since their childhood.

Sheikh Yousef Abdullah Alshoaey was born In 1392 Hijr, corresponding to 1972, in a very conservative family. His father helped him memorize the holy Quran since he was seven years old, as he stated:”The credit belongs to my father, after the Almighty Allah, as he had the greatest influence on my Quranic memorizations”. As a result, he was able to memorize completely the Quran at the age of seventeen years old, and he obtained a “Sanad” under the supervision of Sheikh Ahmad Mustapha Abou Al Hassan.

After graduating from high school, Sheikh Alshoaey had decided to continue his studies in the specialty of Islamic Shari’a, and to do so, he joined the Faculty of Ousoul Eddine at the University of Imam Muhammad Bin Saud In Riyadh. After he graduated from this Faculty, he joined Al Azhar University in Cairo in order to obtain his masters degree.

His educational path was distinguished by the presence of several Sheikhs and scholars who gave him the necessary knowledge about the Shari’a, and the Fundamentals of Quranic readings, such as Abdul Aziz Ibn Baz, Sheikh Abdullah Bin Jibrin concerning the Shari’a science, and Sheikh Mahmoud Sukar concerning the reading of the holy Quran, as well as Sheikh Ahmad Mustapha Abou Al Hassan, and also Sheikh Ibrahim Ali Al Qayim, the Sheikh of the Quran readers in the Prophet’s mosque, who had a deep impact on the knowledge level, mastery of the Quran and on other life’s aspects of Sheikh Yousef Alshoaey.

Sheikh Alshoaey was influenced by numerous Quran readers, such as Sheikh Ibrahim Al Akhdar, Sheikh Muhammad Ayoub, and Sheikh Abdullah Al Juhani. Also, Sheikh Yousef said: “One of those who I love the most, and of whom I love the readings, is Sheikh Ibrahim Bin Abdullah Al Zahrani, the Imam of the mosque “Al Amir Sultan” In Jeddah, and a member of the teaching committee in Oum Al Qura University”.

Besides that, Sheikh Yousef worked as an Imam in the mosque of the prince Abdullah Bin Muhammad Al Saud in Riyadh, and he was also appointed as a member of the Islamic organization of the holy Quran and its sciences. He also has several recordings, as he said: “I have many recorded tapes since 1412 Hijry, and after, until 1418 Hijry, then I stopped at 1424 Hijry, the year in which I recorded a full version of the holy Quran, and a recording of the “Taraweeh” prayers from the holy Quran radio channel.”

From the same country Other 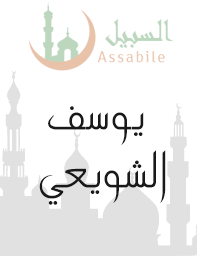 Yousef Alshoaey
Yousef Bin Abdullah Alshoaey is an Imam of one of the largest mosques in the Saudi capital Riyadh, and he is amongst its most prominent Quran readers, who grew up...

Yousef Alshoaey
Yousef Bin Abdullah Alshoaey is an Imam of one of the largest mosques in the Saudi capital Riyadh, and he is amongst its most prominent Quran readers, who grew up...
z