Taoufik Nouri is considered to be one of the most outstanding Quran reciters inside and outside of Morocco, as he is characterized by a very strong voice, an optimal performance, and a mastery of the letters outlets during his recitations. His talent in the “Tajweed” and “Tarteel” of the holy Quran gave him the opportunity to work in the field of Imamate in numerous mosques, especially the mosque of “Al Rida”, which is located in the road of Imozar in Fez, and in which he is still working up until today.

In parallel with that, Sheikh Taoufik Nouri participates in the religious contests, competitions and forums both on the national and on the international levels, most notably his participation in the “third international meeting of Sufism” at the gallery of Imam Al Rifai in Turkey. He participated in the opening of the work of the “first national Quranic conference” In Wazan, Morocco, and he also participated in the night of the holy Quran in the month of Ramadan, which was organized by the ministry of Awqaf and Islamic affairs in Morocco in 1435 Hijr, corresponding to 2014 at the theatre of Mohammed V in Rabat.

On the level of productions and publications, the Quran reader Taoufik Nouri has a very special recording of the recited holy Quran according to Warsh Aan Nafie’s recitation method from Abi Yaakoub Al Azrak’s road. In this regard, and a part from the Hassani lessons during Ramadan of 1436, corresponding to 2015, the Moroccan minister of Awqaf and Islamic Affairs Ahmed Al Tawfik handed a copy of the Quran to the king of Morocco Mohammed VI, as a reference to the importance of the recitation and of the talent of Taoufik Nouri.

This recorded Quranic version was recorded in Fez, and then it was released on CDs in a MP3 format, as well as for available copies on the Internet, found on the most important religious websites. 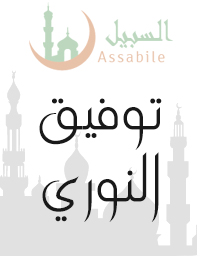 Taoufik Nouri
The Quran reader Taoufik Nouri… A strong voice and an amazing presence Taoufik Nouri is considered to be one of the most outstanding Quran reciters inside and ...

Taoufik Nouri
The Quran reader Taoufik Nouri… A strong voice and an amazing presence Taoufik Nouri is considered to be one of the most outstanding Quran reciters inside and ...
z