Sheikh Muhammad Abdulkareem is considered one of the finest Quran readers in Sudan and the rest of the Muslim world, he was born in “Mashaw” village, near the city “Dongola” in the ninth day of September 1968. He is an Imam and a preacher in the mosque “Al Mujamaa Al Islami” in Khartoum city.
He is married and he has seven Children (Two sons and five daughters).

Sheikh Muhammad Abdulkareem received his basic education in Makkah. He also obtained his bachelor degree from King Abdul Aziz’s university in Jeddah, in the faculty of letters “Islamic studies department”. Later on, he earned his master degree and doctorate in “islamic studies” from the University of Khartoum.

Sheikh Muhammad Abdulkareem was a disciple of Sheikh Muhammad Al Sissi, and Sheikh Ahmed Sabri May Allah’s mercy be on them, in the great mosque of Mecca “Masjid Al Haram”. He was able to memorize the Holy Quran under their supervision in 1983. Also, he was certified by Sheikh Muhammad Nahban Masri with the “7 readings” in 1985. He was surrounded with numerous Sheikhs and Ulema with whom he learned a lot of things, such as “Al Rasm of the holy Quran”, “Alfiya Ibn Malik”, and “Al Aaqida Al Talhawiya”.

The most notable Sheikhs who accompanied him are:

Sheikh Muhammad Abdulkareem is distinguished by his soft and sweet voice and his Quran reading mastery “Tajweed”. He was appointed as an Imam and a preacher in the mosque “Al Mujamaa Al Islami” west of the city of “Khartoum”. Besides that, he was also known for his considerable efforts in “Da’wa” or “preaching”, teaching the sciences of the holy Quran and its “Tajweed” rules, and also Quran memorization.

As a result, he earned a certificate from “Al Arqam” Institute for the Quran memorization in “Masjid Al Haram” in Mecca. He previously held numerous tasks including:

He is currently holding many other positions, such us:

Sheikh Muhammad Abdulkareem is the author of multiple books and publications, most notably:

From the same country Sudan 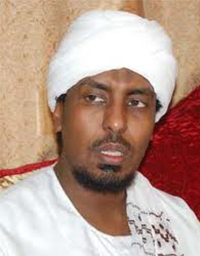