The Republic of the Sudan was known earlier for being an important destination for the Islamic science students, especially in the late nineteenth century. This was due to the existence of large number of “Sheikhs” and Quranic places, also known as “Khalawis”, playing a big role in teaching the Quran and its sciences.

Yet, this prosperity started to fade year after year and the Republic of the Sudan began losing its place as a destination for Islamic sciences studies. Also, the number of Quran readers decreased drastically to a limited number. Perhaps most notably, Sheikh AlFateh Muhammad Zubair, the “imam” and “reciter” who was able to create for himself a wide audience of listeners thanks to the uniqueness of his voice.

In the city of “Omdurman”, located along the west bank of both the White Nile and the Nile River, facing the Sudanese city of “Khartoum”, was the debut of a sheikh who will excel in the art of “Tajweed” the Quran. It’s Sheikh AlFateh Muhammad Othman Zubair, who from an early age, fell in love with the Quran. His father was a supervisor in a Quranic sanctum, Founded at the beginning of the thirties for the memorization of the Quran, as it is well known in the whole country.

Sheikh Zubair was able to memorize the whole Quran at an early age, relying on the traditional method of memorization, which was widespread in Sudan, by writing on the board and overtly revising the memorized parts. After that, he attended the University of the Holy Quran in “Khartoum”, specializing in Islamic studies.

Sheikh AlFateh Zubair has a high social status in Sudan, thanks to his supervision of “Khalwat Zubair”; which he inherited from his father. This Khalwa insures the graduation of hundreds of the Quran memorizers. Besides that, he ensures “imamate” the Grand Zubair mosque in “Omdurman”.

Sheikh Zubair is considered an embodiment of the particularity of Sudanese people in Quran recitation “Tilawa” . It is based on Abu Amr Aldduri’s recitation “Riwaya” which differentiates Sudan from other countries. His sharp and strong tone helped him create a state of rapture “Tarab” to the listener.

Sheikh Zubair enriched the Sudan audio library with multiple Quranic recordings aired in Sudanese radio channels, as well as recording the holy Quran and distributing it in various cities of the republic.

From the same country Sudan 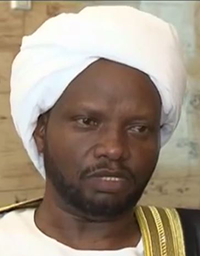 AlFateh Muhammad Zubair
The Republic of the Sudan was known earlier for being an important destination for the Islamic science students, especially in the late nineteenth century. This w...

AlFateh Muhammad Zubair
The Republic of the Sudan was known earlier for being an important destination for the Islamic science students, especially in the late nineteenth century. This w...
z