The scholars and Sheikhs say that the Quran reader and Sheikh Mahmoud Idriss is considered to be a symbol and the go to person in the field of the Quranic readings and recitations, as they call him the prince of the Quran reading mastery. He memorized the holy Quran according to the methods of the companions of the Prophet PBUH, and he studied the science of Quranic explanation, interpretation, and preaching under the supervision of many prominent Sheikhs and scholars. He held numerous positions and responsibilities, from teaching to doing the Athan, to taking the Imamate and preaching. He does not have written books and publications, yet he has a radio program for teaching the Quran and its rules.

The Quran reciter Mahmoud Idriss was born in 1938, in the Palestinian city “Lod”. His full name is Mahmoud Bin Abdulqader Bin Idriss Bin Nasser Oukacha, and he grew up in a very conservative family, and he received as a result a good education and care and love. In 1959, He decided to start his special journey with the holy book of Allah, as he started to memorize it and to understand its meanings according to Ibn Katir’s Quranic interpretation. In that context, he followed the steps of the prophet’s PBUH companions, as he used to memorize ten verses of the Quran, and fully understanding and applying them to real life situations before going on to the other verses and it was up until 1961 that he completely finished the holy Quran memorization.

Throughout his entire educational course, he had the help from many Scholars who took by his hand and helped him perfect his skills and knowledge, as he received different courses in the Quranic interpretation and in preaching under the supervision of the late Egyptian Sheikh Mohammad Al Amjad, and he also received courses in the Fikh, Jurisprudence, Hadith, and Arabic language from The Sheikhs Nouh Al Qadat, Abdulwadoud Al Zirari, and the professor Rajab Al Qudsi. Due to his good education and high morals and personality, Sheikh Mahmoud Idriss decided to serve Allah with a different way, as he worked in 1961 as a servant in the mosque of Omar Ibn Al Khattab.

On the professional level, Sheikh Mahmoud Idriss worked as a Muazen, a teacher, and an Imam in the mosque of Dar Al Quran between 1972 and 1994. He also worked in the Faculty of Shari’a as a professor of the Tilawat course and before it as a professor in the University of Al Bait, and he also moved between several mosques in Jordan. Starting from 1965, he had the opportunity and the ability to teach the holy Quran to hundreds and hundreds of students and he also produced a radio show of thirty episodes talking about the rules of Tajweed and Tilawat in the Jordanian radio station. 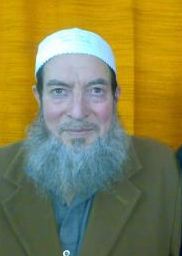 Mahmoud Idriss
The scholars and Sheikhs say that the Quran reader and Sheikh Mahmoud Idriss is considered to be a symbol and the go to person in the field of the Quranic reading...

Mahmoud Idriss
The scholars and Sheikhs say that the Quran reader and Sheikh Mahmoud Idriss is considered to be a symbol and the go to person in the field of the Quranic reading...
z