Sheikh Ibrahim Aljormy is a Quran reader, preacher and Islamic advocate, who studied Arabic language and Shari’a sciences at an early age. He excelled in the Quranic sciences, in the art of Tajweed and Tarteel, and he was schooled under the supervision of many prominent scholars, which honed his talent and gave me a large experience, and was able to impress those interested in the field of Quranic readings inside and outside his homeland. He has some very astonishing Quranic seals that he has recorded with his beautiful voice for the benefit of numerous Arab satellite channels. He has in his name many writings, publications and books that he wrote about the ten readings and the rules of the Quranic recitation.

Sheikh Ibrahim Aljormy was born in Lebanon in 1966 in a conservative Jordanian family. He grew up loving the holy Quran since his young age and he was attracted to memorizing it and to reciting it. He studied the holy Quran under the supervision of many prominent Sheikhs and Scholars, and he was able to complete the memorization of the holy Quran at only the age of seven years old. He moved after that to learn the rules and basics in the field of the Quranic Tajweed, such as AL Jazaria, Al Shatibiya, Raaiat Al Khakani and Nouniat Al Sakhawi, and others. After that, he obtained a doctorate certification in the Arabic language and literature, and high diploma in the Shari’a studies, as well as many certifications in the art of Tajweed and readings sciences.

After his graduation, Ibrahim Aljormy held a number of positions related to the memorization of the holy Quran, including his work as a lecturer in many Islamic schools in Jordan and Malaysia. In addition to his work as a teacher of the Holy Quran and Tajweed in a number of government institutions, most notably his role as Professor of the Tajweed in the Quranic house belonging to the Ministry of Awqaf Jordan since 1990 to today. Also, he supervised the registration of the holy Quran and the Quranic readings of other reciters and he participated in the arbitration of a number of local and international competitions, notably the Dubai Award for the Holy Quran recitation.

The extensive track of the reader Ibrahim Aljormy extended to include intellectual production, writings and audio recordings, as he was able to issue and record many audio recordings and books in the Quranic field and world, including the recording of a complete Quranic Khatma that was broadcasted on Arabic satellite channels, his weekly presentation of a radio program on the Jordanian radio station Hayat FM, and he wrote many books such as: “Dictionary of the Quranic sciences”, and others. 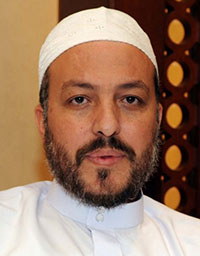