The sheikh and the Quran reader “Khalid Abdulkafi Maqboul” is considered one of the most extraordinary Saudi Imams and preachers. He was born in Mecca in the hijri year 1391, and he is currently working as an Imam and a preacher in “Al Ka’aki” mosque in Jeddah. He is also the creator of the project ”Al Quran Laka” which means “The Quran for you”.

Sheikh Khalid Abdulkafi, the holder of the “Quranic studies” bachelor degree from “Al Mouaalimin” University in Jeddah, had the capacity to completely memorize the holy Quran at an early age. He was accompanied in his beginnings by Sheikh Dr. Adnan Saleh Al Habashy who was his mentor and his teacher and from whom he learned the “basics of Tajweed” and the correct Quran reading methods in “Rahmat Al Mouaeminin” mosque by attending the Quran memorization courses and meetings.

When Sheikh Khalid Abdulkafi was ten years old, his reading ability was certified by Sheikh Ahmed Al Masri. He is currently reading the holy Quran under Sheikh Muhammad Mousa Al Sharif’s supervision in order to get a Quranic “Ijaza” or certification.

Among the most prominent Sheikhs who accompanied him were:

Sheikh Abdulkafi was a very special and unique Quran reader since his childhood, and he was widely influenced by several famous Quran readers, such us: Sheikh Muhammad Sedeek Al Minshawi, Sheikh Muhammad Ayoub, and Sheikh Abdullah Aouad Al Juhani. He prayed the “Tahajud” and “Taraweeh” prayers in “Rahmat Al Mouaeminin” mosque, in which he learned the Quran and its sciences as a student in the secondary school when his age was less than twenty years old. After that, he moved between numerous other mosques before settling in “Aisha Al Ka’aki” mosque, where he works as an Imam and a preacher since 1429 Hijri.

Sheikh Khalid Abdulkafi was entrusted with a number of other functions and tasks. He is a school teacher in “Al Faysalia” school for the gifted students; he supervises a program that prepares the Imams and the preachers for the future and he is as well in charge of “Dar Al Khouloud” school for the holy Quran memorization. He is also a board member “Al Ihssan” association for humans care. Moreover, he is the founder of the “Quran for you” project which is the first of its kind; this project plays a big role in the integration of the holy Quran in the youngsters’ lives, and the project is targeting to reach a million young men and women to regularly read the holy Quran.

Sheikh Khalid Abdulkafi has multiple audio and video recordings and publications, including several speeches, Quranic recitations and prayers “Du’aa”, most notably the “Quran closing Du’aa”, and the “Du’aa for the Egyptians in their plight” in the year of 1432. Besides that, he delivered many lectures inside and outside Saudi Arabia, such us his speech at the Benelux contest of Quran memorization and reading in the Netherlands in 1435 Hijr, and his lecture about the biography of our prophet’s companion Saad Ibnu Abi Waqas. He also participated in several radio and television programs like “Ahl Al Quran” program on the “Alf Alf” radio, and the “Yawm Jadid” program on “Al Majd” television channel.

From his last publications, there is a Khutbah named “Islah Dat Al Bayn” or “Mending fences” and another one called “the affection between the spouses”. 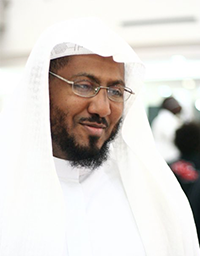 Khalid Abdulkafi
The sheikh and the Quran reader “Khalid Abdulkafi Maqboul” is considered one of the most extraordinary Saudi Imams and preachers. He was born in Mecca in the hijr...

Khalid Abdulkafi
The sheikh and the Quran reader “Khalid Abdulkafi Maqboul” is considered one of the most extraordinary Saudi Imams and preachers. He was born in Mecca in the hijr...
z