Sheikh Hasan Ali was born in 1980 in the city of Tripoli in Lebanon. He grew up in an environment that loves science and scholars, as he always was encouraged to deepen his knowledge and diligence. Since his childhood, he was passionate about the Holy Quran and its rules, loving the Quranic recitation and its fundamentals. After a long track of achievements and learning, Sheikh Hasan Ali was able to obtain a certification of high degree in Islamic Shari’a from the Faculty of Shari’a according to the Fatwa house in Lebanon, and a diploma in Islamic studies from the same university, and a master's degree and a doctorate in information and media sciences from the Faculty of Arts in Alexandria, Egypt.

In addition to his academic path, the reader Hasan Ali Moraib was able to memorize the entire Holy Quran, and he obtained a certification of the “ten readings” according to the Shatibiya and the Dura, under the supervision of Sheikh Dr. Ahmad Al Maasaraoui. He has also accumulated a long experience of more than 14 years in the field of phonology and “Maqamat”, as he learned it from Sheikh of the readers in Tripoli, Muhamad Salah Eddine Kabara, and other prominent scholars from “Bilad Cham, Syria”.

After completing his scientific and educational course, Sheikh Hasan Ali had held numerous positions and responsibilities. He has worked as a vocal expert in Al-Fajr TV channel, and as a vice director of the Quranic reading affairs, and he also served as a Quranic reader chooser for Al Fajr channel since 2005. He also assumed responsibility for the affairs of mosques in the General Directorate of Islamic Awqaf in Lebanon between 2006 and 2009, and in addition to that, he worked as an Imam and as a preacher in various mosques, most notably Omar Ibn Al Khattab mosque in Tripoli, and the mosque Al Moalik Al Zaaim, and in Bahae Eddine Al Hariri’s mosque.

Thanks to his innate talents and professional and scientific experiences, the reader Hasan Ali has participated in many local and international religious and media gatherings and events. He won first place in the best Quran reader competition in Lebanon in 2003 and participated in the 2004 Malaysia and Indonesia International Quran recitation competitions. He also participated in the 2007 World Peace Conference in Mumbai, India, and contributed to the establishment of the World Orphan Care Authority in 2009, which includes leading scholars and businessmen from various parts of the Islamic world. He also came to Morocco after receiving a Royal invitation to participate in the Ramadan Hassaniya lessons which was held in the years 2010 and 2012.

On the level of personal productions, The Quran reader Hasan Ali Moraib has Quranic recordings, TV shows that he supervised such as, the science of the Quran, that was broadcasted in the channel Al Azhari, and the TV show ‘Perhaps they will understand’ on the TV channel Libya, and he also has numerous participations that reflect his prominent position as one of the best scholars and media specialists.

From the same country Lebanon 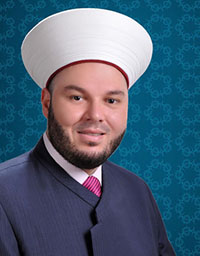 Hasan Ali Moraib
Hasan Ali Moraib, a special Quran reader and a capable media informative Sheikh Hasan Ali was born in 1980 in the city of Tripoli in Lebanon. He grew up in an en...

Hasan Ali Moraib
Hasan Ali Moraib, a special Quran reader and a capable media informative Sheikh Hasan Ali was born in 1980 in the city of Tripoli in Lebanon. He grew up in an en...
z