He is the Sheikh Dr. Ahmed Aissa Hasan El Masarawi, the former Egyptian sheikh of the “’Umum Al-Maqarii ”. He was born in Dakahlia Governorate in the 1st of March 1953. He is married and has nine children, three of them graduated from Al-Azhar Al-Sharif.

Sheikh Ahmed El Masarawi grew up in Dandit village, which is known by its love of the Quran and its admirers. When he was six, he went with his family to one of the village’s schools, where the headmaster noticed that Ahmed was a genius in memorizing the Quran. He advised his grandfather to take him to the school only specialized in Quran learning, where he stayed one year, during which he learned the Quran by heart while he was only ten years old. Then Sheikh Ahmed El Masarawi went to Sheikh Mohammed Abdu Ismail, to read to him the Quran in the Hafs way, he also recited the warsh of nafie way. He read the ten readings (Qiraat) of the Quran to Sheikh Abdul Hakim Abdul Latif and sheikh Mohammed Abdul Hamid Abdullah.

With his father, he left to Cairo to join the Institute of Shubra al-Azhari Balkhazindarh for readings, where he met the sheikhs and senior scientists, and learnt from them through the different stages of his studying, including: the late Sheikh Alhmzana, sheikh Mohammed Elitr, and Sheikh Ahmed El Ashmouni. Then he joined the Faculty of Islamic Studies Al-Azhar University and earned the B.A degree in Islamic and Arabic Studies in 1980.

He Traveled to Saudi Arabia to work at college “Almoalimin” from 1981 to 1985, then he continued his college studies in 1985, and earned a master degree in Hadith and its sciences in 1989, and a Ph.D. in the same field in 1992 with an excellent grade and class valedictorian.

Sheikh El Masarawi had a number of functions and jobs, he worked as a teacher at Al Azhar institute between 1976 and 1993, and taught modern Islamic studies at Al Azhar University Department, then was promoted to the rank of Assistant Professor and then Professor of the department itself.

He became a test Committee member of the Egyptian Radio and Television in 1999, and became the Chairman of the Committee review of the Quran in the Islamic Research Academy in 2003.

He was Appointed as the Egyptian sheikh of the reciters in 2004 , but he was sacked in 2014 due to his participation in the sit-in Raba'a al-Adawiya. He also participated in most of the international Quran competitions, and in many international meetings for preaching and guiding.

In addition to that, there is the audio recordings of the Quran, and the visual recitations broadcasted by some TV and satellite channels such as Al Majd Holy Quran. 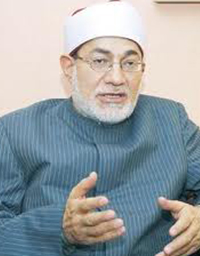 Ahmed Aissa El Masarawi
He is the Sheikh Dr. Ahmed Aissa Hasan El Masarawi, the former Egyptian sheikh of the “’Umum Al-Maqarii ”. He was born in Dakahlia Governorate in the 1st of Marc...

Ahmed Aissa El Masarawi
He is the Sheikh Dr. Ahmed Aissa Hasan El Masarawi, the former Egyptian sheikh of the “’Umum Al-Maqarii ”. He was born in Dakahlia Governorate in the 1st of Marc...
z