His full name is Sheikh Yousef Bin Noah Ahmad, and he is mostly known by « Abou Abd Al Rahman ». The Yemeni-Saudi Quran reader and Imam was born in Mecca and he is currently holding the Imamate of the mosques in the kingdom of Saudi Arabia.

Sheikh Yousef Bin Noah Ahmad graduated from Al Haram Al Sharif in Mecca, and he is currently working as a teacher at the holy Quran department in Al Haram Al Sharif, and he is considered a dependable and a trusted Quran reader in the holy Quran Saudi radio station. The almighty Allah blessed him with a beautiful and soft voice and with a great recitation « Tilawat ». He was able to memorize the holy Quran and to master the art of « Tajweed » as he received a certification in the « ten readings » according to Al Shatibiya and Al Durra, which are all recorded and widespread in the markets.

Sheikh Yousef Bin Noah Ahmad delivered a large number of speeches in the two holy mosques, the number reached one hundred and fifty-eight times, which was divided equally between “Al Haram” mosque and the prophet’s mosque “Al Masjid Al Nabawi”. His lectures however are estimated to about thirty-seven.

Sheikh Yousef Bin Noah Ahmad was known for his multiple talents, as he also excelled at the arts of rhetoric « Al Balagha » and poetry. He wrote a beautiful poem describing heaven « Al Jannah ».

He also recorded with his voice sixteen beautiful readings of some famous poems, such as « Al Mimiya » of Ali Ibn Abdul Aziz Al Qadi Al Jarjani, « Nahj Al Barda » of Ahmed Shawki, « Al Alfiya » or the millennium of Ibn Malik, « Mandoumat Al Bayqunia » and others.

Besides that, he has several clips from the live broadcast of his prayers in the two holy mosques; as well as many messages, prayers « Du’aa » and preaching « Sermons » lessons.

From the same country Other 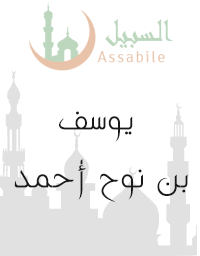