On December 20, 1953, Talaat Mohamed Afifi Salem was born in Giza, Egypt. His father, Mohamed Afifi, is Quran reader.
His talent was discovered since his childhood, as he was able to complete the memorization of the holy Quran, at a very young age under the supervision of his father. He joined Al Azhar School in order to start his primary education, and he was able to obtain excellent grades. He joined in 1968 the secondary level and he studied very hard to obtain his secondary diploma in al Azhar in 1971, and he obtained the sixth position, then the eighth position on the regional level in 1975.

Once he reached college, he joined the faculty of Osoul El Dine in Cairo, and then he was able to reach different degrees, starting with his license degree in the Islamic Da’wah and culture in 1979 with excellence, then he obtained his masters degree with excellence about The Islamic approach in addressing the motives of human behaviors.
In 1986 he won the first honorary degree, after discussing the doctoral thesis on the topic "The story in the Sunnah and its impact on the Islamic call."

He was appointed as a lecturer at the Faculty of Islamic Da'wah in Cairo in 1979, where he continued to work there until he received the professorship degree in 1997 upon his promotions, and he was appointed head of the Islamic Culture Department since that date, until he became the dean of the college in February 2001, for 4 years.

In addition to his commitment to work from within the college, Sheikh Talaat Afifi held several positions, in which he had a significant contribution, including: Professor of the International Islamic University, an envoy to the Islamic Republic of Pakistan and more. Yet, all these commitments did not stop him from giving time to worshiping the Almighty Allah and to advocacy work, as he kept teaching the holy Quran, giving speeches, and taking the Imamate in many mosques in Giza, Cairo, and even outside Egypt.
Sheikh Talaat Afifi became more popular when he was appointed in August 2, 2012, as a Minister of the Awqaf in the government of Hisham Qandil in the era of Mohamed Morsi, the first Egyptian president elected after the Arab Spring. Sheikh Afifi remained in his position until the overthrow of the government in July 2013.

He also has a lot of writings, about literature, advocacy and Fikh, such as: reflections on the fikh of advocacy, the ethics of the Quran, etc. Also, he had a big impact in the rationalization of Islamic awakening. 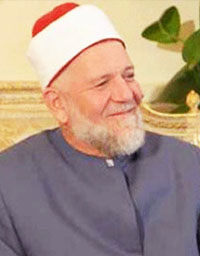 Talaat Afifi
On December 20, 1953, Talaat Mohamed Afifi Salem was born in Giza, Egypt. His father, Mohamed Afifi, is Quran reader.His talent was discovered since his childhood...