Saleh Bin Muhammad Bin Ibrahim Al Taleb is an Imam and a preacher in “Al Masjid Al Haram”. He is also a judge in the Supreme Court in Mecca. Sheikh Saleh was born in the Hijri year 1393 in Riyadh, he is married and he has two sons and two daughters, and he is known for his chastity and smartness.

Sheikh Saleh Al Taleb grew up in a very knowledgeable family, especially in the judiciary and Islamic fields, and his family is affiliated to Hawtat Bani Tamim. He received his primary, secondary and high school education in “Al Nidamiya” schools in Riyadh, and he graduated from the faculty of “Shari’a” at the Islamic University of “Muhammad Bin Al-Saud” in 1414 Hijry. After that, he earned his master’s degree from the “high Judiciary Institute” in 1417. His nomination among three other judges to get a doctorate degree in the international law from Britain was by consent from the crown prince, due to the country’s need at the time to the presence of judges who are not only legally qualified, but have also Islamic and Shari’a Qualifications, in order to represent their country internationally when necessary.

Then, he was assigned to the council of ministers before being appointed as an imam and preacher in the Holy Mosque in Mecca according to the royal decree issued in the twenty eighth August 1423. Sheikh Saleh moved after that to Britain, where he spent nine months to study the English language because of the need to communicate with foreign delegations that come to “Al Masjid Al Haram”.

Sheikh Saleh was able to memorize the holy Quran before puberty, and he was certified by the “Ten readings” under the supervision of Sheikhs Mahmoud Omar sukar, Saber Hassan Abu Sulaiman, and Abdul Halim Saber Abdul Razak. He was also accompanied by several prominent scholars in his country, such us Sheikhs: Abdul Aziz bin Abdullah bin Baz, may Allah have mercy on him, and Saleh bin Abdul Aziz Al Sheikh, the Minister of Islamic Affairs, and the General Mufti of Saudi Arabia.

Besides that, Sheikh Saleh is known for his competence in the judicial field, as he worked in the Supreme Court in Riyadh. And he was accompanied by numerous Sheikhs including Abdul Aziz bin Ibrahim Al-Qasim, Abdullah bin Abdul Aziz, head of Al Taif courts, and he moved between many courts before being appointed at the Supreme Court in Mecca, where he is currently working. He was also called by the ministry of justice several times, which enriched his experiences.

Sheikh Saleh does advocacy work wherever he goes. He was behind the advocacy movements in “Rabigh” city, and he founded a Quran memorization association, and an office of expatriates’ advocacy. He also gives weekly and seasonal lectures and speeches and he participated in local and international conferences. 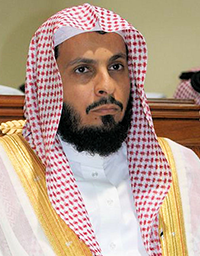 Saleh Al Taleb
Saleh Bin Muhammad Bin Ibrahim Al Taleb is an Imam and a preacher in “Al Masjid Al Haram”. He is also a judge in the Supreme Court in Mecca. Sheikh Saleh was born...

Saleh Al Taleb
Saleh Bin Muhammad Bin Ibrahim Al Taleb is an Imam and a preacher in “Al Masjid Al Haram”. He is also a judge in the Supreme Court in Mecca. Sheikh Saleh was born...
z