His full name is Sheikh Muhammad Anwar Shahat, a Quran reciter who is called the “little experienced” sheikh; little for his age and experienced for his performance. He has a sweet, yet strong voice, and he was a “man” since his childhood, as he was responsible for supporting his family at an early age.

Sheikh Muhammad Shahat was born in 1950 in the Egyptian village “Kafr Al Wazir”. He lost his father when he was 3 months old, which forced his mother to move back to her father’s house. It was there when his strong love for the holy Quran started, as his Uncle Sheikh Hilmi Muhammad Mustapha raised him and helped him memorize the whole Quran at the age of 8 years old.

And because of the importance of “Tajweed”, Sheikh Shahat moved to the village “Kafr Al Miqdam” in order to learn the rules of Tajweed under the supervision of Sheikh Ali Sayed Ahmad at the age of 10 years old. At that time, he showed a great talent and a magnificent voice that made his Sheikh predict for him a prosper future as one of Egypt’s most prominent Quran readers.

The death of his uncle obliged him to enter the world of adults earlier, as he was responsible for supporting his family. He started working as a Quran reader for a very low pay, that didn’t exceed three quarters of the Egyptian pound. Yet, although his harsh start, he was very determined and motivated and he was able to create for himself a reputation with the top readers of the region. In fact, in his twenties, Sheikh Muhammad Anwar Shahat acquired a large fan base in several Egyptian governorates, and he was able to become more popular after the prevalence of the recording technology in 1970.

His success didn’t stop at this point, as he was invited to the opening of a religious ceremony by the President of the center of “Mit Ghamr” city, Hassan Al Hifnawi, and luckily for him, the president of a Quranic radio channel was present at the ceremony, and he was fully impressed by his voice and by his talent.

In 1976, he submitted a request to join the radio station, yet he wasn’t accepted because he was not familiar enough with the methods of intonation, which made him join the private institute of Music, where he studied for two years to become a certified Quran reader in the radio station in 1979.

Sheikh Shahat Muhammad passed away at the age of 58 years old in 2008, after he created a special reputation for himself in the art of Quranic recitation, which made many Sheikhs try to copy his style, such as Sheikh Nasser Al Zayat. 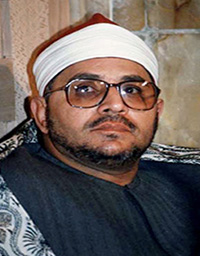