The Quran reader Ibrahim Abdelfatah Al Chaachai was born on the 10th July, 1930, in the neighborhood Darb Al Ahmar in Cairo, Egypt, and he grew up in the middle of a very conservative family with a long story with the holy Quran and its recitation. Sheikh Ibrahim was hugely influenced by his father, Sheikh Abdelfatah Al Chaachai May Allah have mercy on him, as he was one of the most prominent and important Quran readers in the Islamic and Arabic world. That is how the Quran reciter Ibrahim Abdelfatah grew up, in a pure Quranic environment, and he learned the rules of the Quran, its recitation and its principles with an indirect way since his young age, and his father raised him on good manners, values and high ethics, and he taught him everything he could.

The first steps of the Quran reciter Sheikh Ibrahim Abdelfatah Al Chaachai begun with the holy book of Allah, as he started reading it and memorizing it from an early age, and he was able thanks to Allah, and his hard work and talent and dedication to learn everything he could from the rules and art of Tilawat and Tajweed, and the necessary rules in the neighborhood Quranic school, under the supervision of famous scholars at the time, most notably Sheikh Amir Othman who supervised the memorization of the whole Quran. His march in this field continued by joining The Azhari Institution where he obtained a degree, before moving on to study the Maqamat on the hands of Sheikh Darwish Al Hariri.

The Quran reader did not appear in front of people reciting the holy Quran up until the age of twenty four years old, as his recitation received admiration and appreciation and an unparalleled interest, which made his Sheikhs and scholars, encourage him to continue on the same path and work harder. His distinguished style of recitation helped him to join the Egyptian radio channel in 1968, to become after it one of the most stable and prominent Quran readers in that station.

At the same time, The Quran reciter Sheikh Ibrahim Abdelfatah Al Chaachai worked as a reader in the mosque of Sayeda Zainab may Allah be pleased with her in Egypt, which is the same job that his late father held until his death. The reason behind his appointment in that position is the admiration of the listeners by his strong voice and his ability to read according to several reading methods, including Warash Aen Nafie’s method, in addition to his mastery for the rules of Al Waqf, and Al Ibtidae and the rules of balance, and also because the listeners address his reading style as respectful.

Throughout his Quranic career, Sheikh Ibrahim Abdelfatah Al Chaachai received numerous invitations from around the globe. He travelled to many countries and places and he impressed people all around the world with his heartfelt voice. His father’s name preceded him everywhere he goes, and he considered that a source of pride and honor, as he continued in the same path as his father. After long years of hard work and persistence, the iconic Sheikh passed away in 1992, May Allah accept his good deeds. 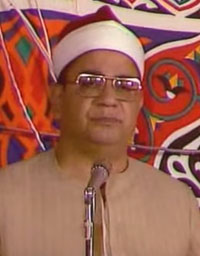