The Egyptian Quran reader Hammam Abdel Fattah Tawfiq has a breathtaking voice and elegant Tilawat. He learned the Quran from an early age and he had a fulfilled learning path, in which he joined the traditional method and the academic method. He specialized in the reading sciences and he accompanied it with an academic formation in the Arabic language. He took the Imamate in several mosques and his heartfelt recitation received a great and positive response from different sects and ages. His sense of compassion and sympathy towards humanitarian issues led him to fight for Syria.

Hammam Abdel Fattah Tawfiq, who is known by “Abi Mouad”, in relation to his old son, was born on the 18th of October 1982, in the middle of a very conservative family, and he grew on noble morals and virtuous values. During his childhood, he was attracted to the Quran and it had a real impact on him as he decided to follow that field. During his youth, he studied under the hands of a number of sheikhs and scholars, and he was able to obtain two certifications In the Quranic recitation according to Hafas and Shouaba Aen Assem with a Sanad related to the prophet PBUH.

At the academic level, the reader Hammam Abdel Fattah Tawfiq continued his studies in the field of Islamic studies and Arabic language in one of the most important scientific institutions in Egypt, the Faculty of Islamic Studies of Al Azhar Al Sharif. After a period of hard work, dedication and persistence, He was able to obtain his degree in the Islamic and Arabic studies in 2005, which opened for him several opportunities including teaching and taking the Imamate of mosques.

The Quran reader Hammam Abdel Fattah Tawfiq took part in many jobs and responsibilities in the field of teaching and Imamate. In the beginning of his journey, he was teaching the young Muslims the rules of the Tajweed of the Quran, its principles and meanings, and he also gave them intensive courses in the Arabic language and its rules. He also worked in the field of the Imamate as he prayed with people in numerous Egyptian mosques especially in the Taraweeh prayers. The Syrian situation affected him so much that he decided to go and fight there, but one day, the 20th January 2014, he passed away in one of the battles. 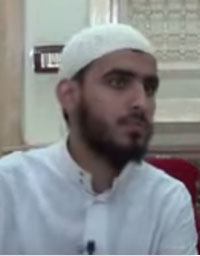