Sheikh Faisal Bin Saud Bin Abdulaziz Bin Muhammad Al Halabi was born in Al Ahsae city, in a very conservative family and among his brothers who are interested in the literature and art. In fact, he is the exception in his family as he specialized in the Shari’a studies.

He was born in 1971, in Saudi Arabia, among his very loving and caring parents, and it was in Al Ahsae city where he continued his all educational course stages. He graduated from the primary, secondary and high school with excellence, which enabled him to receive the award of the prince Mohammad Bin Fahd Bin Abdulaziz Al Saud, prince of the eastern region for scientific excellence.
During his college studies, Sheikh Al Halabi joined in 1989 the Shari’a branch in the faculty of Shari’a and Islamic studies in Al Ahsae University. Then he joined the branch of the Islamic University of the Imam Muhammad Bin Saud in Riyadh, where he finished the rest of his studies until he graduated with excellence, which gave him the opportunity of pursue his high studies in the same University in the branch of Osoul Al Fikh in the Shari’a faculty.

After the completion of his academic course, Sheikh Al Halabi decided to go back to his hometown, as he was appointed as a teacher of Osoul Al Fikh in the Shari’a faculty of Al Ahsae city, in addition to his involvement with several committees in different Universities.

The ambitions of Sheikh Faisal Al Halabi didn’t stop at this point, as he obtained his masters degree in 1999, then his doctorate degree, as he was learning under the supervision of many prominent sheikhs including Abdullah Arakban, Abdulaziz Al Rabiaa, Ahmad Sir Mubaraki, member of the Shura council, Yakoub Albahsin, and many others.

Besides that, Sheikh Al Halabi held many positions, including his work as an Imam and a preacher, as well as being an advisor and the vice president in the family development center. He also participated in several lectures and seminars.
He also contributed to the educational media field through his writings in many Islamic magazines, such as: Society, Da’wa, Family, the future of Islam, etc. He also contributed with a website called “Al Islam Al Yawm” or “the Islam today”, and he published two books with the titles “Al Foutour, causes, manifestations and treatment” and “Al Maarouf gardens”. 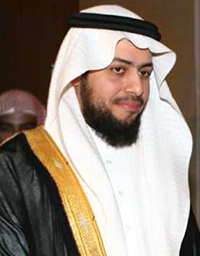 Faisal Al-Halabi
Sheikh Faisal Bin Saud Bin Abdulaziz Bin Muhammad Al Halabi was born in Al Ahsae city, in a very conservative family and among his brothers who are interested in ...

Faisal Al-Halabi
Sheikh Faisal Bin Saud Bin Abdulaziz Bin Muhammad Al Halabi was born in Al Ahsae city, in a very conservative family and among his brothers who are interested in ...